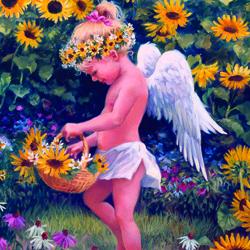 Meet the Rainbow Children! They are the embodiment of our divinity and the example of our potential. The Rainbow Children have never lived on this planet before, and they’re going straight to the Crystal Children as their moms and dads. These children are entirely fearless of everybody. They’re little avatars who are all about service. These are children who are only here to give—Rainbow Children are already at their spiritual peak.

Then, there’s the Crystal Children.

The first thing that most people notice about them is their eyes—large, penetrating and wise beyond their years. The Crystal Children’s eyes lock on and hypnotize you, while you realize your soul is being laid bare for these children to see. Perhaps you’ve noticed this special new “breed” of children rapidly populating our planet. They are happy, delightful and forgiving. This generation of new lightworkers, roughly ages 0 through 7, are like no previous generation. Ideal in many ways, Crystal Children are the pointers for where humanity is headed . . . and it’s a good direction!

The older children (who can be any age, but most were born in the 1970’s), are called “Indigo Children.”

They share some characteristics with the Crystal Children. Both generations are highly sensitive and psychic, and have important life purposes. The main difference is their temperament. Indigos have a warrior spirit, because their collective purpose is to mash down old systems that no longer serve us. They are here to quash government, educational and legal systems that lack integrity. To accomplish this end, they need tempers and fiery determination.

Those adults who resist change and who value conformity may misunderstand the Indigos. They are often mislabeled with the psychiatric diagnoses of Attention Deficit with Hyperactivity Disorder (ADHD) or Attention Deficit Disorder (ADD). Sadly, when they’re medicated, The Indigos often lose their beautiful sensitivity, spiritual gifts and warrior energy. I wrote about the Indigos at length in my book, The Care and Feeding of Indigo Children. I also recommend The Indigo Children and An Indigo Celebration, two other Hay House books written by Lee Carroll and Jan Tober.

In contrast, the Crystal Children are blissful and even-tempered. Sure, they may have tantrums occasionally, but these children are largely forgiving and easy-going. The Crystals are the generation who benefit from the Indigos’ trailblazing. First, the Indigo Children lead with a machete, cutting down anything that lacks integrity. Then the Crystal Children follow the cleared path, into a safer and more secure world. And now, the fearless Rainbow Children are pure givers ready to fulfill our needs.

The terms “Indigo,” “Crystal” and “Rainbow” were given to these three generations, because they most accurately describe their aura colors and energy patterns.
Indigo Children have a lot of indigo blue in their auras. This is the color of the “third eye chakra,” which is an energy center inside the head located between the two eyebrows. This chakra regulates clairvoyance, or the ability to see energy, visions and spirits.

Many of the Indigo Children are clairvoyant. The Crystal Children have opalescent auras, with beautiful multicolors in pastel hues. This generation also shows a fascination for crystals and rocks. The Rainbow Children radiate rainbow energy, the kind that we were created with, to instill within us health and balance.

Indigo Children can sense dishonesty, like a dog can sense fear. Indigos know when they’re being lied to, patronized, or manipulated. And since their collective purpose is to usher us into a new world of integrity, the Indigos’ inner lie detectors are integral. As mentioned before, this warrior spirit is threatening to some adults. And the Indigos are unable to conform to dysfunctional situations at home, work, or school.

They don’t have the ability to dissociate from their feelings and pretend like everything’s okay . . . unless they’re medicated or sedated.

Crystal Children’s innate spiritual gifts are also misunderstood.
Specifically, Crystal Children have telepathic abilities that lead them to talk later in life. In the new world, we will all be much more aware of our intuitive thoughts and feelings. We won’t rely so much upon the spoken or written word. Communication will be faster, more direct and more honest, because it will be mind-to-mind. Already, increasing numbers of us are getting in touch with our psychic abilities. Our interest in the paranormal is at an all-time high, accompanied by books, television shows and movies on the topic.

So, it’s not surprising that the generation following the Indigos are incredibly telepathic. Many of the Crystal Children have delayed speech patterns, and it’s not uncommon for them to wait until they’re 3 or 4 years old to begin speaking. But parents tell me that they have no trouble communicating with their silent children. Far from it!

The parents engage in mind-to-mind communication with their Crystal Children. And the Crystals use a combination of telepathy, self-fashioned sign language and sounds (including song) to get their point across.

The trouble comes about when the Crystals are judged by medical and educational personnel as having “abnormal” speaking patterns. It’s no coincidence that as the number of Crystals are born, the number of diagnoses for autism is at a record high.

It’s true that the Crystal Children are different from other generations.
But why do we need to pathologize these differences? If these children are successfully communicating at home, and the parents aren’t reporting any problems . . . then why try to make it a problem?

The diagnostic criterion for autism is quite clear. It states that the autistic person lives in his or her own world, and is disconnected from other people. The autistic person doesn’t talk because of an indifference to communicating with others.

Crystal Children are quite the opposite. They’re among the most connected, communicative, caring and cuddly of any generation. They are also quite philosophical and spiritually gifted. And they display an unprecedented level of kindness and sensitivity to this world. Crystal Children spontaneously hug and care for people in need. An autistic person wouldn’t do that!

In my book, The Care and Feeding of Indigo Children, I wrote that ADHD should stand for Attention Dialed into a Higher Dimension. This would more accurately describe that generation. In the same vein, Crystal Children don’t warrant a label of autism. They aren’t autistic, they’re AWE-tistic!

These children are worthy of awe, not labels of dysfunction. If anything is dysfunctional, it’s the systems that aren’t accommodating the continuing evolution of the human species. If we shame these children with labels, or medicate them into submission, we will have undermined a heaven-sent gift. We will crush a civilization before it has time to take roots. Fortunately, there are many positive solutions and alternatives. And the same heaven that sent us the Crystal Children can assist those of us who are advocates for these children.

I first began noticing the Crystal Children during my travels around the world, giving workshops about the angels. I noticed their eyes and magnetic personalities. I held mental conversations with the children, and could clearly hear them answer my questions in mind. I’d watch them smile in response to my mentally sent compliments. These kids hear my thoughts! I realized.

Over the next few years, I interviewed children and parents for my book, The Care and Feeding of Indigo Children. I’ve always been fascinated with finding patterns among human behavior. Although we’re all as unique as snowflakes, the snowflakes share commonalities. With the Indigo Children, I found the traits described earlier. With the Crystal Children, my research took even more interesting twists and turns.

Whenever I met them, I found myself falling in love with each young Crystal Child.
Their hearts were as open and loving as any angel with whom I’d interacted. I found them unguarded and unpretentious. I’d go to sleep thinking about these children, and wake up with volumes of information given to me by the spirit world (or perhaps by the Crystal Children themselves) while I slept.

I asked audience members and subscribers of my newsletter to complete a questionnaire about their Crystal Children. Within one day of my putting out that request, I received hundreds of replies. For my book The Crystal Children, I reviewed hundreds of pages of stories submitted to me by people who were raising and teaching these remarkable children. As I reviewed the survey results, two things happened. First, I felt my heart swell with love and gratitude. Just reading the stories was like being in the presence of mighty angels! I felt ecstatically high by these amazing youngsters’ presence on our planet, and also reassured about our collective future. God wouldn’t have sent this special breed of humans to earth, were we on our last leg as a civilization or planet.

Just like humans have evolved from ape-like postures, the Crystal Children are concrete evidence that we’re progressing in evolution.
Secondly, I found crystal clear patterns among each survey respondent. I read dozens of similar stories about the Crystals and their relationships to animals, plants, rocks and the elderly, for instance. I poured over many stories with eerily similar accounts about children telepathically communicating with their parents . . . while eschewing verbal communication.

Many parents told me, “I never could relate to the descriptions of Indigo Children. My youngster seemed different. But the Crystal Child description was one that perfectly described my child!” Most parents reported a happy relationship with their Crystal Child marked with very few problems. I heard from parents and grandparents around the globe as they described their Crystal as “an angel,” “the love of my life,” “a true joy,” and so on. I noticed that not only were the Crystal Children highly spiritually sensitive, but so were their parents. The souls of Crystal Children were obviously selecting parents who could raise them in a spiritually nurturing environment. Occasionally, I met children who came through parents who were spiritually unaware. In these cases, their grandparents were highly evolved lightworkers who helped to protect and hone the child’s spiritual knowledge and gifts. Most people told me that their Crystal Child was a profound spiritual teacher, who taught parents a great deal about being an exceptionally loving and kind person.

One day, I was lecturing about Crystal Children in Sydney, Australia. At the break, my publisher (who was there selling my books) said to me, “What is this book that everyone is asking me about? They’re all asking to buy a Crystal Children book!”

I laughed and told him that there was no such book. I was simply reporting the data that I’d gathered from interviews and my own channelings. My publisher said, “Well, they obviously want the book. Will you write it?” Without hesitation, I heard myself reply, “Yes, of course I will.” My book, “The Crystal Children” is now available at most bookstores and can also be purchased on this Website. (See Bookstore)

We also recently launched a new Website: www.TheCrystalChildren.com (Note the “The” before the term, “Crystal Children”). This site includes articles and a special message board for parents, grandparents, teachers and crystal children to support one another.

These children are the answers to our prayers.

The Rainbow Children are now being born as the Crystal Children become adults. And these are a few adult Crystal Children that are in their 20s now. Rainbow Children are coming about because the full spectrum of light that we need to assimilate serotonin in our body has been reduced. In other words, when we go out on a clear day with no smog and we’re out in the sunshine, we’re receiving in our body a “rainbow” through the sun waves. And that’s the way that we were created—to need rainbow energy.

As a team, we Earth angels, Lightworkers, Indigos, Crystals, Rainbows and whatever generations that God/Goddess has in store for us after that, are all here working together. We’re all here for peace.

And we can do it! To learn more, see my books,
The Care and Feeding of Indigo Children and Awaken Your Indigo Power.