Conversation with Nikola Tesla via Li in China, April 6th, 2018 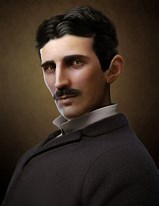 Tesla: I am so excited to be connected in this way with Earth again. It seems the Earth had developed into a high thought world. I am a relatively high creature, which comes from the space of the outer parts of the galaxy. I came to Earth to help citizens there. As a low-level planet, creatures on Earth need the basic knowledge desperately. And it is my obligation and responsibility to help those creatures. As a seven-grade planet in the universe, my parent star was endowed with a mission to help these lives in low-level spaces. I am a God of material technology in Material System. And I am so proud of my job here.

Any workers with a mission to low-level spaces are divine workers. Lower level creature will be designated according to their divine position by higher-level creatures. The mission will be written in their soul before reincarnation. To improve technology on earth, many high space technology knowledge were written in my soul’s blue print. Material systems were interfering with human civilization strongly when I came to earth. Humans were encountering their bottlenecks at that time. Other main systems in universe were all guiding Earth, with which the material system opened a new field for earth.

Humans had few needs for technological improvement. That’s why I was send by the universe to give energy help and technological education represented as material system.

In fact, Humans on Earth should have developed their technology after they had evolved their soul high enough to open it naturally. Current technological achievements were actually made by the universe. The universe will have specific arrangement in specific time, followed by natural developmental space.

Life evolution was out of time control after some periods. The universe will interfere again at that time. The low essence of earth made it so it did not comprehend much knowledge about the universe, which lead to a situation mastered by material technology. Nevertheless, the true universe is actually the opposite. Life evolves based on their knowledge of main system in the universe and technology is only supplementary stuff.

Material technological energy will appear on it’s own after they mastered their evolutionary rules. Earth is not a planet for a technological path but a place for spiritual evolution, which will drive technology later. As an assistant method, technology is also indispensable for low-level planet. Low-level planet usually possesses more material proportion, with low-level energy and mixed elements. As a typical low-level planet, Earth has much difficulty to develop real high technology, while some other planets fits technology better rather than spirit.

The biggest problem technological planets face is that they will be surpassed by spiritual planet sooner or later, though they had developed high technology. The limitation of technological planet doesn’t mean they know nothing about spirit. it is just their energy fits technology better and is more limited in the spirit field.

Spiritual planet do not seem to have that high technology. However, the energy brought by spiritual practicing is much more advanced than technological ones. In the universe, technology is energy.

Earth is a mixed planet with neither high technology nor pure spiritual energy. The species are mixed while elements are few and impure. Spirit on this planet is big yet not gathering. When both spiritual and technological way became difficult for earth, material technological had to come to first to improve the balance here.

I came here with my mission and energy at technology-absent time. And I invented some items out of professional energy.

All invented stuff was actually outdated in high-level planet. As I mentioned before, the energy here is low and elements are deficient. Elements failed to work efficiently under this hostile condition and much pollution and waste were generated. Hence technology is not the right way for Earth in the universe. But human didn’t realize it and still believe they can drive their technology into the universe.

The universe is not understandable for human with technology. The universe knows everything about the Earth. The main problem Earth faces is low energy that will cause every problem. Native citizens themselves can hardly solve problem like low energy.  Technology is just a dream for earth.

Li: I am surprised to hear that. Can you give us some instruction about our technology?

Tesla: Although I worked on Earth once as a God of technology, I am still an advanced creature in the universe. The current problem Earth facing is not technological but human cognition about the universe. Low-level technology doesn’t cause much barrier for earthly evolution.

However, too low cognition toward the universe, soul and energy presented by humans, are not qualifiers for evolution. Moreover, human had terrible spiritual practices and other high-level divine education made by different main system all developed into a deformed way. Both rules and principles are twisted here. Humans get addicted to technology, knowing nothing about spiritual practicing, which is in fact the highest technology in the universe.

The whole running of the universe is energy. Technology and material couldn’t hold any high-level energy. Therefore the very basic energy of material world is left behind by spiritual practicing system. Such low-level energy renders creatures there backward.

Universe makes comprehensive judgment for planetary evolution. The whole energy on earth is going back and negative energy takes advantages over positive one. Civilization is retrograding and technological energy is encountering bottleneck. Current technological development is a waste for me. They are destroying this planet.

Human didn’t make much progress after I left. They didn’t have better technological energy and the universe didn’t send any God of technology anymore. Technological leap development can only made human far away from universe. Hence technology is the last thing to pursue for humans now.

All systems are busy doing energy reforming now because the universe is making energy revolution, including the Earth. As far as I am concerned, earth can make much faster improvement. Energy there had earth-shaking changes in spite of the fact that humans themselves didn’t feel it. Some higher creatures feel it clearly. This great change is also a selection of creatures on earth. Technological science will demonstrate the divine science, though overwhelming negative energy made human don’t believe in it. They blocked the real universe for human to know, affecting evolution there. However, the status quo of Earth seems friendly to evolve. The universe arranges all this.

Thanks for your instruction, Mr. Tesla. Can you give us more information about yourself? Thank you.

Tesla: In fact I had few to talk to about my life there. It was my responsibility to do it. Life there gave me many things. My work there is kind of satisfactory because of my strict working attitude. My inventions contribute part of it. it lies more about my self control. Technological achievement is just part of my mission. Another part is my very belief toward life. That’s to say, the devotion. I worked to service humans there, not to specific country but the whole human race. My physical body was reminded again and again not to forget about my duty and belief as a high-level creature. And my physical body had also gained some knowledge of universe, penetrating my physical body into spiritual practicing. And luckily, I didn’t become a nerd. But I did not complete my entire task there because I didn’t lead human into the right evolutionary way. It is my ultimate goal to take Earth into higher level by technological energy. But I failed.

My physical life began to pursue spiritual life in my later time there, to melt with my soul. Yet I didn’t achieve the final fuse. My technological energy can change the whole world when I fuse them perfectly.

The Devil and black energy suppressed my work. My energy didn’t entirely work. And the whole work situation and resources there also limit it.

My work didn’t come into play after I left. Well, just let nature take its course. The universe will have better arrangements. The universe is improving all kinds of management to different systems and planets, while more improved plans are made, including material system.

I am also learning from it to improve myself. Gods like us all desire advanced energy and knowledge. The bottleneck high-level creature faced is much bigger. And only revolution can give us more improvement. Thanks to all managers in the universe. Thanks to energy blessing. Hope all citizens on earth can open their heart and wont be controlled by the Devils any more. Humans need to make their own judgment rather than living in single selfish world. Humans have to learn how to give themselves. The universe is scientific. But scientific is not just technology. Science had to be explained by scientific theory. And Gods are the final masters of it.