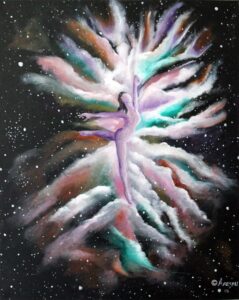 There are strong winds blowing around the world and it is the way of the dark ones in order to show that they are now here on Earth to show their power and put people in fear and hatred.

There are also warm and good winds blowing over the world which are of the light and which soften the harsh winds somewhat so that people can feel calm in their lives which will nevertheless become very turbulent in the near future.

The light that comes into the world is extremely strong and those who shun the light run far to escape it, showing that it is still the light that is the stronger of the two winds that blow over the people. It is only necessary to begin to understand that it is not possible to have this destructive development and realize that it is only the people themselves who must come to an understanding of this.

It is still relatively calm in the world. It will get much worse and with the new recruits for the dark ones who have come to Earth for their Lord it is a difficult transition into the new year with attacks from all sides by the dark ones. Their goal is to capture as many pure souls as possible to their Lord and unfortunately many will eventually join the army of the dark.

It is so extremely important now to start examining yourself about where you stand in relation to the dark and the light side of life. It is now that it is most important to go over to the light side and that refers to Our Lord, Jesus and the Holy Spirit to be saved from the dark side and for survival. It is never too late to turn to the bright side and ask Our Lord for help if it is difficult to understand what it means.

There are so many people in the world who have not even heard of Our Lord, Jesus and the Holy Spirit, which can be due to many reasons. That’s why it’s so important to ask for help or to talk to a priest to gain more knowledge and understanding about what it means to have a faith. In this day and age, it means more than ever to feel that there is hope for a better world and future. To try to save as many as possible by opening their eyes to where the Earth is going and to get as many as possible to join the ascension it is a big task for the lightworkers to explain and calm the people who are very confused in everything that happens.

With love and compassion, many people can be saved from being affected by all that is destructive and give an understanding that it can be scary, but not being part of everything that happens and instead being an observer, it becomes easier to stand outside of everything chaos.

Everything has a meaning, nothing is a coincidence and this scenario has long been determined to occur in this time of the shift on Earth to a higher dimension. The love and respect from all civilizations in the Universe is great when they see how people still fight for their planet and being in the Universe.