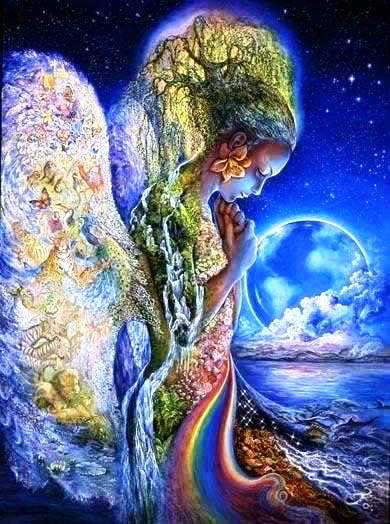 Everything is now being exposed during a period of time, as you yourself will see are the hard, miserable, highly negative events, thoughts and experiencing coming to the surface. Everything must come to the surface in order to be cleansed. Look at it as when a body is sick and is going through a severe flu. You get a high fever and feel as if you are going to die and leave the life on Earth, with a fever close to 40 degrees. In reality you are being exposed to powerful cleaning and cleansing. Look at it as the whole surface of the Earth now has a cleansing flu. Abscesses having been encapsulated during thousands of years now crack open and a smelly gooey pus comes out of its holes. It seems terrible and as if it is worse than ever, but in reality the material underneath the abscess is doing better as everything has come to the surface. Underneath it healing can take place and the “cells” of the Earth can get a new more harmonic and stable structure that has become stronger after getting rid of the inflammatory pus.

Some of you need to tumble around in the negative flames in order to really get sick of them and have enough of it. The insight that you create your lives yourselves is now becoming more and more integrated and eventually many will let go of the need to swim in the inflammation, precisely because they are done with it. This takes time my friends. Understand that it is not easy for anybody who has believed in the fight against others to all of a sudden let go of this fighting. These my fellow humans experience how their identity is falling apart and they become confused as to what to believe in now.

The resistance towards fighting on the planet is large and is growing every day. This is the largest threat against those that need something to fight against. The stronger you get in becoming driven by the flame of love be conscious of the fact that there struggle to hold on to duality will increase to max capacity. They are enormously threatened by your momentum and you become mocked, spit on and made fun of to a larger degree than you understand. From my perspective I see that for a period of time it has to be this way. I have endless patience and have the greatest love and care also for these my humans who are stuck in the dark matrix. They have their reasons and it has not been easy for them and I can see and embrace their whole history. I can see when they sometimes choose a lighter thought or a lighter energy and feel compassion even as they almost fight against this feeling. I then rejoice in my whole being and get a glimpse of my coming existence, where there is no space for fighting and mean mindedness. The existence is several octaves higher with space for more light and love.