Although there may seem to be a stalemate on the surface as the battle for Planet Earth rages on, something huge is coming, multiple U.S. government-linked sources agree. The secret space program is about to be unveiled, NSA sources say. For their part, NASA sources say some sort of anomaly is “affecting the very fabric of reality.” The U.S. military is also now in full war-time mode with over 1 million reservists being called up. As a result, the list of missing celebrities, billionaires, and politicians keeps growing as a massive purge of Satanists continues.

As the real criminals are being rounded up, the bankruptcy of the U.S. corporation is now leading to the mass release of mostly non-violent offenders. While many law and order advocates are raising alarm bells, the fact is the U.S. has been operating a massive prison slave labor gulag.

Americans are 20 times more likely to end up in jail than Chinese. For example, an African American friend says her brother was jailed simply because his hair tested positive for marijuana. This is but one of countless examples of the ruling cabal using any pretext to gather up prison slave labor. A colleague in Singapore has seen U.S. bonds backed by prison slave labor being sold to investors in the Far East. Let that sink in: the U.S. government has been selling slave-labor backed bonds to the Chinese.

The bankruptcy of the corporation is now shutting down this gulag. Only the truly dangerous criminals need to be kept in jail in the present circumstances. Maybe setting up a system of gang-controlled prison reserves might be the way to go forward on this?

The sheeple meanwhile, hunkering down in their homes, are very slowly beginning to realize their current government is composed of criminals and liars.

Many traditional news outlets are now waking up to this reality. The New York Post, for example, is reporting that Bill Gates may have created the coronavirus in order to microchip people. The NSA is saying the same thing, as crazy as it sounds.

The vaccine industry is being busted big time and people will be horrified when they learn what trusted medical officers have been doing to them.

The rabbit hole runs deep and there can be no doubt a family mafia has been running the Western world like a giant slave ranch for thousands of years going back to Babylon.

The Russians have been hysterically attacked because they were able to pinpoint the leadership of this mafia. The photographic evidence below, for example, is just part of a mass of proof that shows Adolf Hitler’s children have been running much of the Western world since WWII ended.

Did you know Barack Obama’s mother, a criminal wanted by the FBI, was according to the Russians a daughter of Adolf Hitler? His father, Frank Marshall, was an American communist agent. Here is a picture of the FBI wanted poster and agency file photo for Obama’s mother.

These other photos sent by the Russians may help you wrap your head a bit around the enormity of the lies we have been told since the end of WWII (if not longer). Before looking at them, please realize Hitler escaped Berlin on a plane to Norway before taking a submarine to Argentina. He lived to a ripe old age in Paraguay on a ranch that was subsequently bought by the Bush family. That is why many of his children were born long after the war ended.

The right-hand side photo we have posted before showing Adolf with his daughter Angela Merkel. To convince doubters we now add an official photograph on the left side of the young Angela for comparison purposes.

The next photo shows the family resemblance between Hitler’s mother and Merkel. 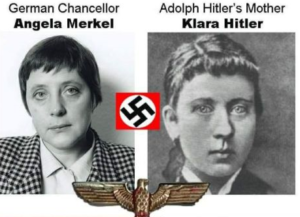 Then we have Angela’s maternal grandmother’s photo (Eva Braun’s mother). 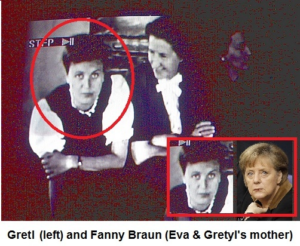 The following photo shows three of Hitler daughters who ended up in positions of power: Angela Merkel, Theresa May and Dalia Grybauskaitė, President of Lithuania 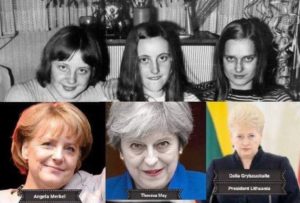 Here we can see the percentage of Jewish blood among top Nazis. 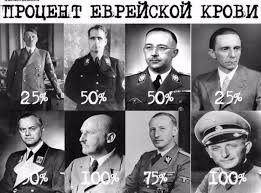 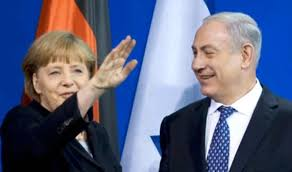 The release of evidence like this is part of an attempt to wake up the sheeple to the reality of their gangster government.

After the false-flag attack on 9/11/2001, the Nazis fulfilled their long-term plan of taking over the United States and turning it into a fascist puppet state. That is what is now being taken down by the White Dragon Society and its Western and Eastern allies.

Here is a summary of what is being uncovered (from Prepare for Change):

The White House, Senate and Congress lists go on and on…it’s all one big cabal family club and you are not allowed anywhere near it!

This is what the alliance is fighting against. These are some of the celebrities and politicians we are being told have already been arrested (it has yet to appear on an official Justice Department press release so think of it as provisional at this point):

This group is still not going quietly into the night and it is clear they tried to kill us and scare us back into submission with the coronavirus “plandemic.” It is also clear that for some reason, their bioweapon attack on the human race is being neutralized.