The Opening of Your Third Eyes ∞The 9th Dimensional Arcturian Council 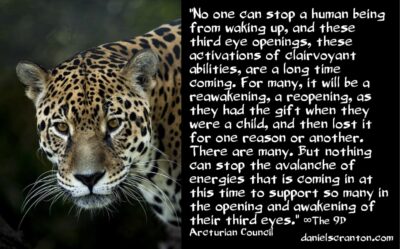 The Opening of Your Third Eyes ∞The 9D Arcturian Council, Channeled by Daniel Scranton

We are very eager to witness all of you gaining more access to your clairvoyant abilities, your ESP, your sixth sense. We know that some of you came in with those gifts and abilities turned on, and others of you have developed those gifts since you’ve awakened. But there are still so many who have yet to tap in to these powers, and make no mistake about it, they do make a person more powerful.

A person who is clairvoyant can perceive things that others cannot, which at first can come across as a curse to many who possess that power, but they are the trailblazers. They are the ones who decided to develop those abilities sooner than most so that they would be able to show all of you the way to have more control over your gift.

And now we see that more and more people are getting the upgrades, the activations, and the attunements necessary to have a very wide open third eye. For many, it’s not because of anything that they have done. It is just time for more humans to awaken, and this is one of the easier ways to get those who have been asleep to wake up. And so, the opening of the third eye of so many humans is what will be taking place over these next several months. The mass awakenings that you have already experienced on your world are just the beginning, and there is a need for more.

Some of you who are receiving this transmission right now will be the perfect ones to help your fellow humans who have those newly-opened third eyes. And you will answer the call, because you have wanted to be of service for so long, and it is also fun to have a gift and then to see someone else develop their gift. It gives you something to talk about. It gives you something to have connect about, and that is something else that humanity needs at this time. You need to feel more connected to one another, because those who seek to separate you are continuing to put forth that agenda in a variety of ways.

But no one can stop a human being from waking up, and these third eye openings, these activations of clairvoyant abilities, are a long time coming. For many, it will be a reawakening, a reopening, as they had the gift when they were a child, and then lost it for one reason or another. There are many. But nothing can stop the avalanche of energies that is coming in at this time to support so many in the opening and awakening of their third eyes.