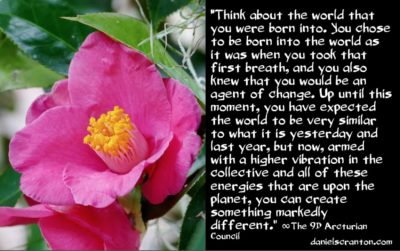 We have been following the developments in your consciousness evolution, and when there are huge spikes, surges, in the vibration that you offer, overall as a collective. We are happy witness one of those spikes occurring at this time, and we are eager to see what you will do with the increase in the vibration of your consciousness. There are lots of agendas out there for humanity, and there is also a lot of opposition to an agenda. A certain percentage of people will say that humanity will say that humanity needs to move in this direction, and an equally high number of people will resist that.

What we want you to recognize, as individuals and as a collective, is that you don’t need anyone to agree with you in order to utilize the additional energy that you have available to you to create your reality. You don’t have to get everyone on board. You don’t need a unanimous decision that says, ‘Yes, this is the right direction for humanity to be moving in.’ You get to create the reality that you want to experience, and when you see how that reality is going, and whether it serves everyone in the way that you hoped it would or not, you can make course corrections.

Right now, the reality out there that you experience is your creation, whether you agree with that statement or not. You can blame the cabal. You can blame the politicians. You can blame the negatively oriented extra-terrestrials, but it is your creation. And that is supposed to empower you. It’s not supposed to shame you, that truth. And know, please, that you created that reality because you knew that it served a purpose for you and everyone else in the human collective. You would not consciously create a reality where there is any suffering whatsoever. However, there is suffering in the world, and now you have an opportunity to create a different reality more consciously.

When you see something that is out there in the world and that is deplorable to you, that is abhorrent, don’t go right to blaming some force outside of you for the way it is. Accept that this is the reality that you’ve created because you needed to experience it in order to trigger you, in order to get you to feel compassion, and in order for you to make a conscious choice. Now, if there is anything that we want to instill in your consciousness with this message, it is the following. We want you to know that now is the time to create consciously the world that you want to experience, the world that is beautiful for everyone, not just those who are living lives of luxury.

Now, what we don’t want you to take away from this message is that anything is your fault. Think about the world that you were born into. You chose to be born into the world as it was when you took that first breath, and you also knew that you would be an agent of change. Up until this moment, you have expected the world to be very similar to what it is yesterday and last year, but now, armed with a higher vibration in the collective and all of these energies that are upon the planet, you can create something markedly different for you and everyone else to experience.

You’ve had to work with what was in front of you for your entire lives, and some of you have done your best to change the world through action, through voting, through donating your money to good causes, but now is the time to bring the consciousness that you have evolved into to this creation process and to feel how powerful you are as creator beings. We want you to know that and we want you to feel it, because that’s the only way to complete that mission of inhabiting that fifth dimensional Earth that you all want to inhabit. You can, by the way, and you will. We would like to see you doing it more consciously and deliberately, and we know that you want to start living in that world sooner than later. And that is the purpose of this message.