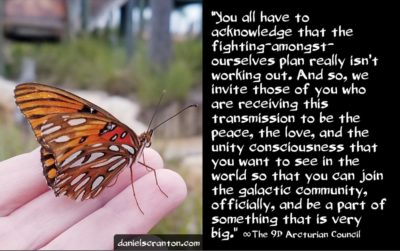 We have begun to explore the possibility that humanity will be joining the galactic community in less than two years. We are talking about full membership in the galactic federation, something that those of you receiving this transmission are very eager to experience. You want to meet your fellow beings out there in the stars and for those meetings to happen on a regular basis. You don’t want to have to wait for a visitation in the middle of the night where one of your e.t. friends comes in through a portal or through the window, and we want this for humanity as well.

We want it for you sooner than later because we know that full extra-terrestrial contact will bring you an expanded state of consciousness. It will be like meeting all of the various parts of yourself. That will be a shock to most humans. Those of you who have been following our transmissions know that it is inevitable for you all, not only to meet these friends in different form, but also to feel that they represent parts of you.

Now, there are several possible timelines for this full membership to occur in less than two years, and on each of them we see you becoming less polarized. We see you coming together in the knowing that splitting humanity into groups and then having those groups fight among each other isn’t working. That way of living is not getting you to where you want to go, and so, we see our role as not convincing people that e.t.s are out there and most of them are good. But instead, we see our role as helping more humans awaken to the truth of who you really are so that you willingly set aside your differences and unify as a collective.

You desire peace, and by ‘you’ we mean the vast majority of humanity, and certainly those of you who are awake. And therefore, instead of us trying to initiate some sort of full disclosure, we will continue to work behind the scenes to get you all to seek that inner peace, to awaken to the truth of who you really are, and to stop fighting with one another.

Again, you all have to acknowledge that the fighting-amongst-ourselves plan really isn’t working out. And so, we invite those of you who are receiving this transmission to be the peace, the love, and the unity consciousness that you want to see in the world so that you can join the galactic community, officially, and be a part of something that is very big.

To be a part of a federation of star systems is a monumental feat and one that we hope you are all striving for and believe can be accomplished. We certainly do.