Are You Better Off Being Awake? ∞The 9D Arcturian Council 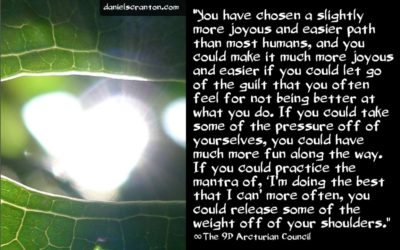 ARE YOU BETTER OFF BEING AWAKE? ∞THE 9D ARCTURIAN COUNCIL, CHANNELED BY DANIEL SCRANTON

We have been very interested in how you would handle the transition from being third dimensional beings to being fifth dimensional beings. We knew that many of you would become aware of this shift in consciousness that we are all experiencing, but we did not know whether being awake would benefit you, or whether remaining asleep would be the easier path.

As empaths and healers, you often take on the issues and energies of those that you are there in service to. As awakened beings who understand that you are shifting your consciousness, you are less likely to drown your emotions with drugs and alcohol. And as beings of service, you often feel as though you should be doing more to assist in the shifting of the collective consciousness.

However, what makes the journey more joyous and easier on you is that you have far less doubt and much more of that sense of knowing about where you are going and what you are doing at this time. You’re less worried about death than the average person who is unawakened.

You are there to lead the rest of humanity in this shift in consciousness, but you are also there to enjoy the journey. And so, sometimes that means feeling less responsible and looking for ways that you can experience more of the joy, more of the excitement, and more of the appreciation for this beautiful journey that you are all on together. We know that you sometimes want to put your heads down and forge ahead, and that’s why we will keep encouraging you to sit back, relax, put your feet up, and let some of your helpers do the heavy lifting.