We Are All Source Energy Beings ∞The 9D Arcturian Council 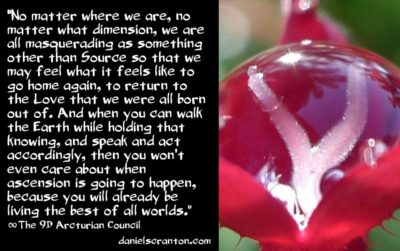 WE ARE ALL SOURCE ENERGY BEINGS ∞THE 9D ARCTURIAN COUNCIL, CHANNELED BY DANIEL SCRANTON

We are very interested in the way you all perceive yourselves in relationship to Source Energy. We understand that most of people, the vast majority, were not raised in a household where it was explained to you that you were an aspect of Source Energy and that the entirety of Source Energy existed within you. And since so many humans were not given that talk early on in their lives, most of you felt alone, unworthy, and even felt that you were sinners, disappointing God with your lustful thoughts, your lies, and your petty theft.

Now, here you are as adults, and you have all of that programming to undo. There are people within the new age community who still do not believe that they are Source Energy Beings in the flesh, creating experiences in order to expand that which Source is. And then there are many who know this truth intellectually, but still believe that a certain percentage of humanity is evil. And we have news for those people. If you are an aspect of Source, then so is everyone else.

People have been throwing around the idea that a certain percentage of humanity are really human at all. They are either androids, or illusions, or some other made-up story to make it easier to separate.

One thing that we want you all to understand is that Source is all about inclusion. Yes, there are differences between you and other humans, and yes that causes conflict, but that conflict also results in the expansion of Source. And so, there is no need to dehumanize anyone. And in fact, in so doing, you are dehumanizing an aspect of yourself.

Trust us when we say that in some past life, you have done some pretty reprehensible things, and that’s what those people represent to you, so that as a Source Energy Being, you can forgive. You can feel compassion, and you can offer unconditional love. You can be Source Energy in the flesh. You can include. You can embrace. You can expand.

That’s the purpose of those people existing on Earth and elsewhere who are doing such horrible things to other humans, and to animals as well. And don’t forget the planet. There are plenty of negative acts performed by beings who have felt so separate from Source that they have resorted to these actions in order to feel something that they couldn’t otherwise find a way a to feel.

And so, each and every one of you who is receiving this transmission would benefit from sitting quietly, closing your eyes, and feeling for Source Energy as that spark of Divinity that exists within all of us. No matter where we are, no matter what dimension, we are all masquerading as something other than Source so that we may feel what it feels like to go home again, to return to the Love that we were all born out of. And when you can walk the Earth while holding that knowing, and speak and act accordingly, then you won’t even care about when ascension is going to happen, because you will already be living the best of all worlds.