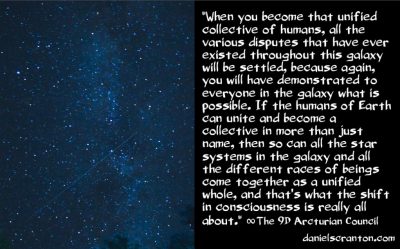 Your Official Invite to Join the Galactic Community ∞The 9D Arcturian Council, Channeled by Daniel Scranton

You are taking on so much for the rest of this galaxy that we share, and as a result, there are so many beings throughout the galaxy who owe humankind. As you get closer and closer to becoming a unified collective there on Earth, you become the solution to issues that are billions of years old.

You have taken on more than your fair share as a collective because you wanted to be at the center of the unification of the Milky Way galaxy. You wanted to be the first domino to fall, and you wanted to let that moment be the same exact moment when you were invited to be a part of our galactic community, officially and with much fanfare.

This journey that you are on is all about being the microcosm of the galaxy and the universe. You get to be that representative of all the various star systems in our galaxy, and you get to contain all the different energies and all the DNA from the various systems.

And as you sort out your internal issues, you as an individual put out a vibration that demonstrates to the rest of humankind that it can be done. You can become a unified whole as an individual, and that will be the spark that ignites the flame that spreads throughout the human collective consciousness, so that everyone knows what is possible when you focus and apply yourself.

And when you become that unified collective of humans, all the various disputes that have ever existed throughout this galaxy will be settled, because again, you will have demonstrated to everyone in the galaxy what is possible. If the humans of Earth can unite and become a collective in more than just name, then so can all the star systems in the galaxy and all the different races of beings come together as a unified whole, and that’s what the shift in consciousness is really all about.