We Are Awakening Your Immortality ∞The 9D Arcturian Council 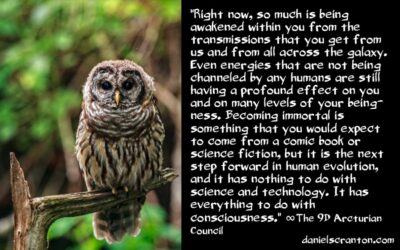 We Are Awakening Your Immortality ∞The 9D Arcturian Council, Channeled by Daniel Scranton

We are awakening within your consciousness and within your cellular memory the awareness that you have been able to live much longer lives in your human physical bodies. There have been humans who lived for hundreds of years in your ancient past, and they were not being kept alive by machines and drugs. You need to have those memories awakened within you in order to take the leap forward that you are taking, and we are referring to the leap from having a mortal, carbon-based vehicle to an immortal, crystalline-based vehicle.

Right now, so much is being awakened within you from the transmissions that you get from us and from all across the galaxy. Even energies that are not being channeled by any humans are still having a profound effect on you and on many levels of your being-ness. Becoming immortal is something that you would expect to come from a comic book or science fiction, but it is the next step forward in human evolution, and it has nothing to do with science and technology. It has everything to do with consciousness.

When you first awakened, what should have been quite shocking to you was the idea that you are Source Energy Beings. That is much more significant than being Cleopatra or Napoleon in a past life. To accept your divinity means to accept your immortality, and we do understand that it takes time for a belief like this one to really take hold within the consciousness of a human being who sees death around themselves and wonders how anyone could become immortal without some type of magic. But it is not magic; it is consciousness. It is a way of knowing yourselves as having transcended the physical, while still maintaining a physical form.

When you don’t see your physicality as your true self or ultimate self, then it becomes easier to use the body as the vehicle for your soul that it was always intended to be. So what do you have to do then in order to make all of this happen, as we are sure that it seems rather enticing to most of you. The answer is simple; you don’t need to do anything, but you do need to change your perception of self, your perception of others, your perception of reality. You need to shift what you know to be finite to the infinite.

If you want to do something, then do an exercise where you seek out the feeling of infinity within you. Seek out your true eternal nature as a vibration, and then watch yourself transform before your very own eyes, because all of this that we speak of is inevitable, but you can accept it and put yourselves on the fast track, or you can deny it and take the slow and winding route to your immortality. Either way, you are destined to arrive.