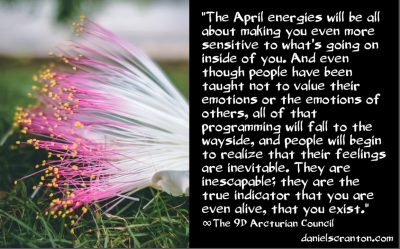 We are so very happy with the way that humanity has been progressing in the past several weeks, as we have noticed a huge uptick in the number of people there on Earth who are willing to look within themselves. We understand that there’s a great deal of temptation for all of you to look outside of yourselves. Never before on your planet has it been easier to do that, especially with all of the technology that you have at your fingertips.

That’s why it is very impressive to us whenever any of you looks within yourselves, and we’ve been seeing a lot more of it lately. Looking outside of yourselves can get tiring, confusing, and overwhelming, and those of you who are sensitive and in touch with their emotions know this to be true. You feel it, and you just want to curl up into a ball and feel your feelings. That may not sound like a big deal to a lot of people.

A lot of people place a tremendous value on doing and also believe that feelings are not important, inconvenient, and even deceptive, but this is the world you are shifting into now and those who oppose sensitivity are having a hard time. They are digging in their heels; they don’t want to be sensitive to others or put any weight whatsoever on how someone else is feeling about something, anything. But here is the good news; those who do not go within, those who are not even a little aware of how they feel, are not going to have a choice in the matter because of the energies that you have coming in during the month of April.

The April energies will be all about making you even more sensitive to what’s going on inside of you. And even though people have been taught not to value their emotions or the emotions of others, all of that programming will fall to the wayside, and people will begin to realize that their feelings are inevitable. They are inescapable; they are the true indicator that you are even alive, that you exist.

Those of you who put a premium on how you feel are once again leading the way in this consciousness evolution, in this shift, in your ascension to the fifth dimension, which is going quite nicely, by the way.