The Arcturian Council via Daniel Scranton, May 22nd, 2020

Inner Earth E.T.s As the Gateway to First Contact ∞The 9D Arcturian Council 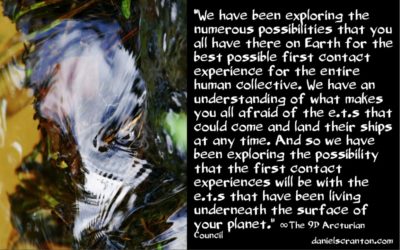 We have been exploring the numerous possibilities that you all have there on Earth for the best possible first contact experience for the entire human collective. We have an understanding of what makes you all afraid of the e.t.s that could come and land their ships at any time. And so we have been exploring the possibility that the first contact experiences will be with the e.t.s that have been living underneath the surface of your planet.

When you don’t have ships from outer space with advanced technology staring you down, there is a greater probability that you are not going to panic. When the visitors are from your own planet and look enough like all of you to not be frightening to the average person, there is a greater chance that you will be able to handle it.

These extra-terrestrials that have come from other parts of the galaxy, but that are really Earth-born, give you a new way of looking at what is extra-terrestrial and what is alien to all of you. Because these beings have been living on your world and in your world for so long, those that you would meet would all be Earth-born but with no human Earthling DNA. And so, this would soften the blow for those who were afraid, but it would also make it easier for the skeptics to claim that it’s not real and that the scientists must be in on some grand conspiracy.

But these beings do exist, and you are going to meet them in your lifetime. It will be very hard for them at first to integrate, but they eventually will, and they will pave the way for the e.t.s who will land their ships and who will have been born outside of your solar system. Now, we are saying this as though it will happen in this way, but no one can say for certain what will happen. We have just been exploring that timeline and meeting with those of you who are members of the awakened collective to get your feedback. So far, this probability has been met with open arms and open minds, not to mention open hearts.

You all are so eager to meet these beings, especially when you realize that they are the gateway extra-terrestrials for you to then meet your hybrid children and all of the other e.t.s that you are so eager to meet. This is a time where humanity could use something to shake things up, and you could use a little help from your Earth-bound extra-terrestrial friends. And so, we are hoping to see the Earth-born extra-terrestrials emerging sooner rather than later and paving the way for the e.t.s who want very much to feel the readiness of humanity to land those ships and become your friends and co-creators.