The Arcturian Council via Daniel Scranton with VIDEO, May 8th, 2020 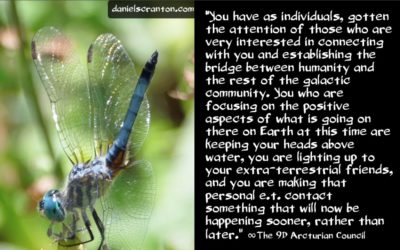 We have been establishing contact with so many humans, while you are traveling in the astral plane, and we have been creating together new timelines for humanity. These new timelines are for those who want to stay in a higher vibrational state. These are the timelines that have been created as a result of all that you have been experiencing there on Earth over the past several months, and these timelines are going to bring you closer to full and open e.t. contact, which is the first major event that you will have leading up to your ultimate ascension to the fifth dimension.

We hear you when you express the desire to make your own personal contact first. You want to meet the benevolent e.t.s who have been helping you from behind the scenes. You want to board their ships and explore new worlds, and even though most of what is being said and written at this time is about the malevolent beings working behind the scenes, there are enough of you who recognize that the other end of the spectrum also exists.

And you want to connect with those beings, rather than focusing on defeating those who are playing in the dark. This amplified desire that you all have as a collective is just the energy necessary to co-create these new timelines for personal e.t. contact, followed by full, open contact for the collective. Those of you who have kept your vibrations high have demonstrated that you are ready for your own contact, and you have shown how mature you are and how advanced you are.

Therefore, you have as individuals, gotten the attention of those who are very interested in connecting with you and establishing the bridge between humanity and the rest of the galactic community. You who are focusing on the positive aspects of what is going on there on Earth at this time are keeping your heads above water, you are lighting up to your extra-terrestrial friends, and you are making that personal e.t. contact something that will now be happening sooner, rather than later.

Once you have your e.t. encounters, and you report back to the rest of the awakened collective about what you’ve discovered, then you will be able to bring more of the new age and spiritual community along for the ride. And that’s the important role that you all are playing for humanity and for your community there amongst the awakened.

We could not be happier with how this is going in that sense, and we are also holding so much space, sending so much compassion and healing energy to those affected by the virus. Those who are sick and those who are saddened by loss are always to be respected and honored, never to be forgotten amidst all of the theories that are being put out there about what’s going on.

It’s time to do something positive and to take positive steps, and you are the ones who are doing it, who are taking those steps, and who are releasing yourselves from the victim/perpetrator model. That is something to celebrate, and we are celebrating with you every night in the astral plane.