The Individual & the Collective ∞The 9th Dimensional Arcturian Council 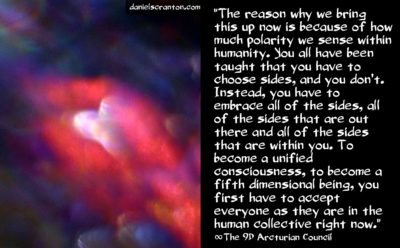 We have a better sense of who you are as individuals than we do of you all as a human collective. Your individuality is beautiful. You are all unique, and you are all special, but you have also been led to believe that your differences somehow are responsible for the lack of unity that you sometimes experience as individuals. And nothing could be further from the truth because you all have the ability to celebrate each other no matter what.

And the idea that you are somehow separate from each other is one that has served you up until a certain point, and now human has reached that point where it no longer serves you to see yourselves as separate and to see your differences as significant enough to keep you from knowing yourselves as a collective.