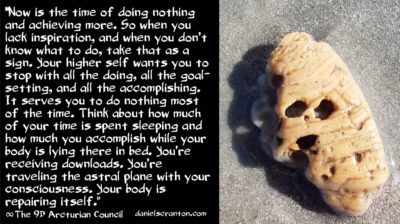 Most of the reason why the progress is being made is because you do not feel inspired to take action. When nothing out there appeals to you, that’s when you tend to slow down to a virtual stop. That’s when you tend to go within. That’s when you get quiet, open up, and receive. It’s either when you are doing something you love to do or doing nothing. And so, the limitations of your world, the things that prevent you from going all the time, are helping you to find that balance between doing and non-doing.

You are ascending. That is happening. That’s not something you make happen through your actions. As you ascend, as you become more of who you are, your actions become more effective because you are inspired. When you are uninspired not taking action is precisely the thing to do. It is precisely the thing to not do essentially, because you’re not doing something just to feel productive. The whole idea of being productive was created in the third dimension. It was created during a time when you had to do so much more just to survive, and it has been embedded in the consciousness of so many.

But now is the time of doing nothing and achieving more. So when you lack inspiration, and when you don’t know what to do, take that as a sign. Your higher self wants you to stop with all the doing, all the goal-setting, and all the accomplishing. It serves you to do nothing most of the time. Think about how much of your time is spent sleeping and how much you accomplish while your body is lying there in bed. You’re receiving downloads. You’re traveling the astral plane with your consciousness. Your body is repairing itself.

Now, some of you have a hard time forcing yourself to sit still, and that just means you need to do it more than the next person. So listen to the lack of inspiration as much as you listen to those inspired thoughts to move towards something, those impulses to actually do something, and you will continue to make that progress that we are so excited about.