Your Journeys Throughout the Galaxy ∞The 9D Arcturian Council 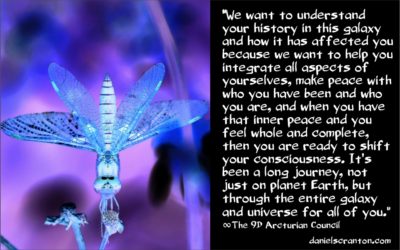 YOUR JOURNEYS THROUGHOUT THE GALAXY ∞THE 9D ARCTURIAN COUNCIL, CHANNELED BY DANIEL SCRANTON

We are in the process of exploring which of your personality traits can be assigned to the different star systems that you are all from originally. We know, for example, that the trait associated with helping others, being of service, is something that you have brought to Earth and to yourselves from the Sirius star system. You incarnate there to explore that theme. The theme of being of service then becomes a part of you, and you are all there to integrate these various themes and aspects of self. In some instances, like Sirius, the Pleiades, and our little star system, it is obvious. You get your capacity to teach and heal others from the Pleiadian star system. You get your proclivity towards spiritual evolution from our star system of Arcturus.

Certain star systems are more of a mystery in terms of what they have lent to the evolution of the human consciousness. When you were incarnate in the Orion system, for example, you explored victimhood and oppression. And so, we are unraveling those traits within you that might harken back to that time when you were in the Orion system, and you were either an oppressor or a victim. Most of you played both roles, and that is also something we want you to recognize so that you can embrace that you also at times have played in the dark, just as those who would oppress you now have done.

It is our theory at this point that you explored victimhood and oppression to eventually glean the trait of balance and moderation from those lifetimes. It is a system that went from great war to tremendous peace, and so your tendency towards wanting peace comes from your association with the Orion system.

You all travelled from star system to star system on your way to Earth, and Earth was always meant to be a melting pot of the galaxy where a race of beings, the human race, would have the opportunity to bring all of these traits, all of these aspects together and integrate them into oneness and wholeness. In the star system known as Antares, you also explored themes that are somewhat of an enigma in terms of how they’ve contributed to the human condition and personality as it is today. In the Antarian system, you created androids, and those androids eventually rebelled, and so there was a great war there as well. Your desire to explore technology to the ultimate heights, and the search for a balance there as well is evident in your history and the history of the Antarian system.

We believe at this point that the time you all spent in the Antares star system was meant to make you rely on your intellect to the degree that you have. People on Earth put much more faith in science than you do in what you cannot see and touch and prove. And so that is our working theory on how the Antarian roots that you have are affecting you now.

We want to understand your history in this galaxy and how it has affected you because we want to help you integrate all aspects of yourselves, make peace with who you have been and who you are, and when you have that inner peace and you feel whole and complete, then you are ready to shift your consciousness. It’s been a long journey, not just on planet Earth, but through the entire galaxy and universe for all of you. And in the acceptance of all that you are and all that you have been, you are bringing yourselves closer and closer to that moment of ascension.