The Arcturian Council via Daniel Scranton with VIDEO, September 29th, 2020 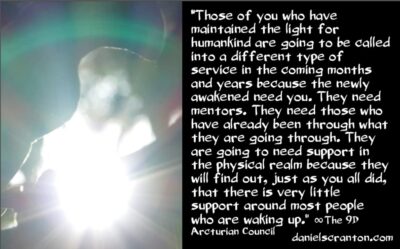 We are very enthusiastic about all of the changes that you have coming there on planet Earth, and the reason why we are so eager to see these changes coming is that we know they are coming because of the newly awakened humans. This is been a year of so many awakenings. So many individuals have awakened because they had to stop doing for long enough to explore their being-ness.

What we are seeing now is the ripple effect that the newly awakened are having on the collective consciousness. They are helping you go even further in your development because there is now more than ever a huge need for those of you who have been awake for a while to be the teachers, the leaders, the guides that you were born to be. Many of you have been serving humanity simply by holding a high vibration, by working with the Earth’s energy grids, and by refusing to fit into a nice little neat pigeonhole so that others could feel comfortable around you.

Those of you who have maintained the light for humankind are going to be called into a different type of service in the coming months and years because the newly awakened need you. They need mentors. They need those who have already been through what they are going through. They are going to need support in the physical realm because they will find out, just as you all did, that there is very little support around most people who are waking up.

Usually you don’t have a lot of people around who are validating your experiences and telling you that you are on the right track. In fact, for most of you, it was just the opposite of that, and you want to give these newly awakened humans a better experience. You want to help them grow and evolve with as much joy as they can possibly flow through them. You want to be the ones who guide them back into themselves when they get too involved in someone else’s teachings.

It is the open-mindedness of the typical awakened soul that leads many down a path that they will later want to get off of, and you can help these individuals to focus on what’s important in their spiritual evolution. We know that you can. We know that you will, and we know that with your help, the newly awakened will bring about the massive changes that you’ve wanted to see there on Earth for quite some time.