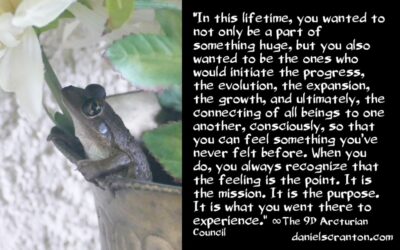 What You Knew Before You Incarnated on Earth ∞The 9D Arcturian Council, Channeled by Daniel Scranton

We have been noticing that when you raise your vibration as a collective, there is a certain amount of excitement that is generating for you throughout the entire galaxy. Every time we feel an uptick in the overall vibration of the human collective consciousness, we then feel the ripple effect, and it is inspiring. You are there to elevate the consciousness of your fellow humans. That is why you chose to go against the grain in this lifetime and be a part of a minority. The minority we are talking about here is the awakened collective.

You wanted to feel yourselves as the ones who would initiate that ripple effect throughout your human collective consciousness, so that you could then experience what it is like to have such a huge positive impact on the entire galaxy. We are very proud to be a part of your spiritual evolution, because we know how significant your ascension and awakening of consciousness is. We are happy to be here for you and to see you taking such tremendous strides forward. You do so because not only did you choose to be awake in this lifetime, but you also chose to be sensitive to your feelings.

Everything else, you have already done. And so, in this lifetime, you wanted to not only be a part of something huge, but you also wanted to be the ones who would initiate the progress, the evolution, the expansion, the growth, and ultimately, the connecting of all beings to one another, consciously, so that you can feel something you’ve never felt before. When you do, you always recognize that the feeling is the point. It is the mission. It is the purpose. It is what you went there to experience.