For the Awakened & Newly Awake ∞The 9D Arcturian Council 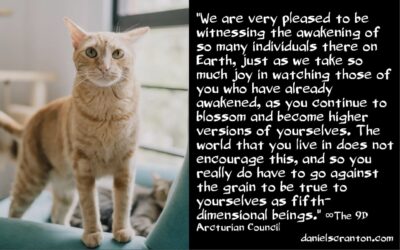 For the Awakened & Newly Awake ∞The 9D Arcturian Council, Channeled by Daniel Scranton

We are very pleased to be witnessing the awakening of so many individuals there on Earth, just as we take so much joy in watching those of you who have already awakened, as you continue to blossom and become higher versions of yourselves. The world that you live in does not encourage this, and so you really do have to go against the grain to be true to yourselves as fifth-dimensional beings. You must lovingly say no to people who want you to join them in condemning someone else, or some group, because at your core you do know that unity and oneness are a part of your ascension.

You do not get to where you are going by putting yourself or anyone else into a nice, neat little box. Boxes have walls, and you are not there to further engage in separation and segregation. You are there to foster love and integration. And so, when we talk about you furthering your evolution of consciousness, this is what we mean. You must see the opportunities that are in front of you all day every day for doing this. And the good news is, those of you who are awake have tuned in more to your emotional bodies. You are sensitive; you are empathic. You know when something feels good to you and when something feels off.

When something doesn’t feel right, that is a clue to you that it’s time to let go of whatever it is you’re thinking about, whatever it is you’re putting your attention on. It just doesn’t serve you, and it doesn’t serve that overall goal that every single person has of ascending. To ascend is to become closer to Source Energy, and Source Energy is everything and everyone. So if you see someone offering you an invitation to join them in pushing against some person or some group, some ideology, then you simply have to politely decline to be a part of that movement.

Being aware of such movements helps you to recognize what is needed there on Earth. You need more of this: you need more people who are wanting to come together. And when people are newly awake, they tend to recognize this; people want to find their tribe, their soul family. And those of you who are receiving this message most certainly have been at that point or are at that point now.

So you can do this just as much as anyone else can. You can decide that you are going to start a group, or a movement, that is about uniting humanity in spite of all the differences that you have. You can have different opinions about what is right and ethical to eat and still be united with other people. You can have different opinions about who has the better political ideas and still be united with those individuals you disagree with. You don’t have to let any belief separate you. Instead, as you focus on what unites you, which is the truth that we are all one, then you attract to you more individuals who believe that as well and who want to live that in their daily lives.

When you start to think about that as a goal, or as a mission, then you need not look any further than your circle of family, friends and colleagues. And you know that you can come to together with those individuals based on the truth that they are Source and so are you. And you can get past any differences you have because you are ready to rise above all of that, and you are the ones to invite others to do so as well.