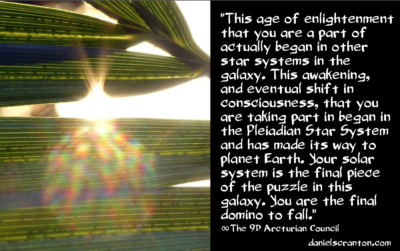 This age of enlightenment that you are a part of actually began in other star systems in the galaxy. This awakening, and eventual shift in consciousness, that you are taking part in began in the Pleiadian Star System and has made its way to planet Earth. Your solar system is the final piece of the puzzle in this galaxy. You are the final domino to fall.

Like you, as individuals, the awakening of consciousness has moved around from start system to star system. Earth, which is a planet of extreme polarity, has been a challenge for all of you, even though you have successfully awakened your consciousness in other parts of the galaxy. This awakening was meant to be long and arduous, but you signed on knowing that it would be necessary for the process to be long and arduous.

You, as a human collective, have summoned so much energy because of what you’ve lived there on planet Earth, because of what you have endured. Now that you are making connections to other aspects of yourselves in other parts of the galaxy, you know that the shift is getting closer and closer. Your awareness of these other aspects of yourselves and these other star systems has helped you tremendously in reconnecting to the parts of yourself that have already awakened.

Now is the time for things to get easier on all of you, as you reconnect, as you reintegrate. Considering how far you’ve come, and how long a journey it has been, it is no wonder that many of you are tired, weary, and at the point of giving up at times. But you are ready, as a collective, to bring all that you have already experienced to this solar system, to complete the shift in consciousness.