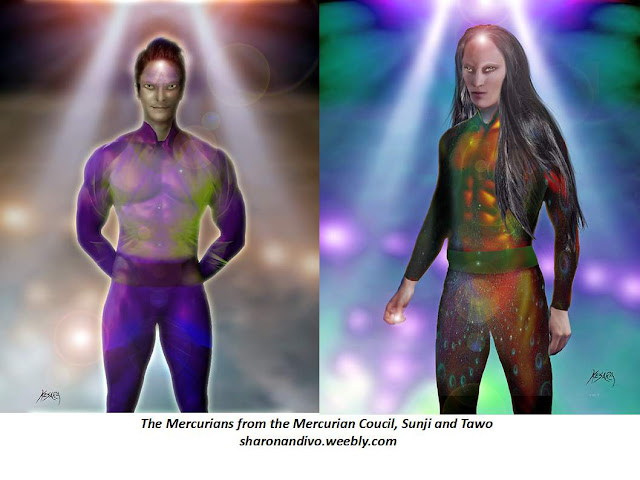 Tawo and Sunji of Mercury on Nuclear War on Earth

Me: So how are you doing?

T&S: We’re doing fine. We’re seeing things are not going so well for you on the planet earth.

Me: I think it’s going fine.

T&S: Then you understand the reality rather than fear the unreality. This has been the problem with planet earth almost from the beginning … the unreality that people prefer to manifest.
Me: I don’t see what’s so preferable about another war.

T&S: Yet many people on the planet do! They believe war stops problems.

Me: I’m shaking my head.

T&S: Let us tell you some history of earth… you may know this already or you may not. Many years ago, around the time of Atlantis, your sister planet Vulcan was blown up. They were at war. It was an internal war with many negative factions from outside of the planet aiding those upon the planet to continue to war. They were supplying weapons and fuel to both sides of the war, this is the same as your warlords do upon earth now. They supply to both sides. Why? Because they enjoy war. The planet was blown up but before this point many of them were able to escape. Vulcan is where your Kyper Belt is right now. These warring factions went to Mars and continued to war there. The people who already lived upon Mars told them to leave. They did. Where did they go? They went to earth.

Your current situation has a lot to do with events throughout history in our solar system, never mind the entire galaxy.

Me: Yes. I knew about Vulcan or some call it Maldek, blowing up because of war. And that they came here and became the 13 bloodlines. Or did they?

T&S: Not exactly. They became the slaves of the thirteen bloodlines, which were already established. The Annunaki are the ones who make up the bloodlines – they mated with humans in order to live among you. They are what you call the long heads but they are Annunaki. Now these Annunaki were infiltrated themselves by powerful demonics, the Archons, and the warring factions who warred on Mars were seduced into becoming their slave race. The role of the earthling in this was to be the animal – you were exploited and still are to this day.

Me: So they don’t even see us as being human – they think we’re animals.

T&S: Yes. That condescending. When they have sex with your females, it is as if it is the same as your male having sex with sheep.

Me: I’ve always noticed that there’s a hierarchy on this planet. What happens between two lower levels is always reproduced at higher levels, and of course, vice versa.

T&S: It is sad. Your people have been so victimized, held captive for so long. Now finally, you are getting your first chance at true freedom but it means you must ascend to the fifth dimension along with your planet.

Me: I’ve heard it from the perspective that Gaia is basically fed up and has had enough of our warring and way of life, and she’s leaving to go to 5D with or without us.

T&S: (smiling) That is a third dimensional earthling perspective, Sharon. In fact, Gaia understands what will save you and decided to undertake this ascension in order to facilitate saving the people of earth. This has got nothing to do with her being fed up of you.

Me: Yes, I think people on earth tend to interpret things through their own filters so we create strange explanations for nature and animal behaviour.

T&S: You can do nothing else. That’s why you require higher guidance.

Me: So where has Mercury been throughout this Ascension process? Where have the people of Mercury been and what have they been doing about this if anything at all, say since December 2012?

T&S: Our ships grace your skies. We are studying you, your reactions, attempting to understand your thinking. We have been helping to guard key players in this liberation process. We are on the ground as well as in your skies, Sharon.

The fact is, as you may have noted, not all Mercurians look like earthlings. Your bloodlines are different from ours, although we all consider ourselves humans. You have many Nordics, as well as bloodlines of certain skin colours and your eyes are relatively straight. We have eyes that would give us away as being alien to your planet, so when we walk among you we either use body suits or we use dark sunglasses which we never remove.

Me: Yes, that’s true. I look at the pictures done of the four Mercurians on the solar council and then the other Mercurian I know is a snake man, so yes, you don’t seem to appear too much like us.

T&S: We don’t. We have been working with the Venusians, who are spearheading the solar project to liberate earth. We have much guidance to give. Earth does have a history with Mercury, although not necessarily a positive one.

Of course these warring peoples who came to Atlantis were seeking conquest across the solar system, and one of the planets they decided to attack was ours, Mercury. Mercury is a fine hunter, and a fine god of war, and so are its people. We defended ourselves from earth’s attacks and in turn we had to seek out the ones who were doing these deeds and try to deal with them. Well, we did not get them all.

Your Atlanteans and Lemurians, who were the most advanced races on earth at the time, objected to our landing to get justice. All we were trying to do was to stop the attacks upon our people, yet for some reason this was objected to.

Me: Probably black magic. They’re good at that.

T&S: It’s possible but hard to believe that the Lemurians would object to our seeking justice.

Me: Maybe there’s more to it. Maybe they objected to the Mercurians, I’m sensing.

T&S: Yes, we were a warring species for a long time. We had finally found our peace around the time of your Atlantis and Lemuria, so perhaps our presence was not welcome because the memories of what we had become were so fresh in their minds.

T&S: We speak with Adama, Sharina and Tethen of the earth council but there are others who are reluctant to speak with us. They prefer to interact through Adama and voice their opinions behind our ears. (Away from where we can hear them). They also block themselves telepathically so we cannot hear their thoughts.

Me: Hmmm. Sounds like you still have to mend fences. It’s a saying we have. To make up.

T&S: There are still undealt with aspects that natural law would have us heal. We work hard to do it. We thought perhaps we could mend fences by helping the outer earth and by doing this the Agarthans would see that we are now a benevolent species with good intent.

Me: You can help me. Come land your ship and we can go flying through the solar system. LOL

T&S: We would need to council with Ivo on this.

Me: Ivo’s been trying to land himself to pick me up. So if you can do it, then he’d let you. Last time we tried there were packs of draconian and reptilian ships in wait for him. They tried to ambush him, like he’s so stupid he didn’t suspect that.

Me: He’s totally awesome! So how is it that the Venusians have been landing here since the days of George Adamski, yet the Vegans can’t land without ships intervening?

T&S: Because they land undetected. They also have people on earth who are undetectable. The Vegans are of a higher light of human and it is harder for them to land here without detection.

Me: Well Tawo and Sunji, you guys look like you’d be a lot of fun and I’d love to go flying in your ship with you!

T&S: Perhaps that will happen one day. For your TV station, we could do a tour of the solar system and we could show you the best spots upon all planets.

Me: That’d be excellent! So I think we got off topic. I was going to ask you how do you feel about neighbors like us who are pushing the nuclear buttons again?

T&S: We are shielded. We have a planet that is excellent in its capacity for shielding, even cloaking the planet so that we would be undetectable to hostile extraterrestrials who fly into this solar system. But yes, it is the fabric of space that concerns all when nuclear technology is involved. You realize you got this from the greys, correct?

Me: Yes. It sure wasn’t Ashtar that gave it to earth! LOL

T&S: They gave you this technology, knowing that you would misuse it to kill yourselves eventually, and your people were seduced because they felt that this gave them such power. The deal was nuclear technology in exchange for human life, so as the Zeta’s see it, they have won on both counts. You kill yourselves either way.

Me: I was reminded the other day too, maybe it was you guys, that the Zetas have their own agenda for earth. They may work alongside other negative species but they have their own plan for our people, and for this reason they have to be taken off the planet and arrested as well. Phil Schneider told me about this and it’s on our first website under the Zeta Agenda. I’ll link it in below in case you want to read it. But don’t think, folks, that with all the low lifes out there in the galaxy that there is one agenda for this planet – there are many species who are exploiters and the only thing they want to exploit is those with more power than themselves. I can tell you from past experience that the ones they want to exploit are the ones with the power who don’t realize how powerful they are. That’s why you have to learn to understand the truth about being a human.

T&S: Yes, they are evil. They give you the means to kill yourselves off – or suicide yourselves as they see it. It was nothing they did wrong. They believe they are innocent and cannot be persecuted by universal law for their deeds.

Me: Like giving a kid a gun. What could go wrong?

T&S: Yes, many of the negative species are this manipulative. However, much as the Mercurians are proud of their defenses, they do seek to help others in need. The place to start of course is your neighbors because they live so close to you.

Me: That’s the obvious strategy.

T&S: As we’ve said, the Agarthans still have their reservations about the people of Mercury, but those upon the surface do not, so we prefer to help you in order to build trust with all others of the galaxy.

Me: That’s a good strategy.

T&S: We would give you a ride, however we must ask your hosts (?) about this.

Me: Interesting use of the word “host”. Are you talking about a parasitic relationship?

T&S: We are implying that Ivo and Ashtar hosted your journey upon earth, and they continue to host it as they keep you safe from much harm.

Me: Yes, I don’t know if we have a word for that. Aids? Facilitators? Probably facilitators would be best. They facilitate my life on earth. Yes, I know it would have been over long ago had they not protected me.

T&S: Very well then. This will suffice as an introduction, Sharon. We thank you for your time.

Me: Thank you Tawo and Sunji. Remember the ride in your ship! LOL