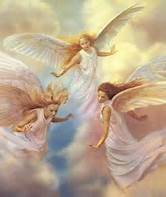 Today we would like to focus your attention upon the topic of intuition. It is a sense that each and every one of you are born with, though it often goes unnoticed because it is not a physical sense.

It is our intention in this message to further explain what each of the 3 paths to receiving guidance from the higher realms are and to furthermore help you to determine which one is the path of least resistance for you.

As we were saying, each one of you has the innate ability to connect with the higher realms, in fact you have never actually been disconnected, but rather the connection has become weakened for many but never lost. All children are born with the inner knowing of how to connect to the higher realms because they have not yet fully emerged themselves within the physical yet.

But as you rely more heavily on the physical senses to determine what to trust and what is “real,” the intuitive ability lessens as it is no longer being used. It is much like an atrophied muscle that weakens over time from not being stimulated or strengthened, however just like every other muscle within your body when it is used more regularly, it strengthens. You each have the ability to regain the strong intuitive ability that many call channeling.

Energy will always take the path of least resistance. When we send our messages to our channel, we are not speaking words or any particular language, but rather we are sharing energy which is then being channeled and translated by the brain using the vocabulary available to her in which you refer to it as the English language.

The three most common paths are clairvoyance, clairaudience and clairsentience. You may very well find that you are a combination of 1, 2 or even all 3; however it is very common to find that one in particular seems to be the most predominant of all.

We will begin with clairvoyance, which can be described as the ability to receive messages through visions, images or symbols. This can be in the form of physical or seen with your mind’s eye. It is much more common that those who are predominantly clairvoyant will see pictures, textures and colors in their minds eye, or imagination rather than with their physical eyes.

Many find this to be difficult to decipher between the imagination and a vision from the higher realms. Visions will often be direct answers to questions you had just asked of the higher realms. Learning or we should really say remembering how to consciously direct your channeling ability is well within everyones ability.

Clairaudience can be described as the ability to hear the guidance of the higher realms. This again can be with either your physical or “spiritual ears,” though it again is far more common that it is received through your spiritual ear. This is how our channel most regularly receives and translates our messages; through her spiritual ear. Those who are clairaudient can usually detect even a subtle difference in the “voice” or dialect that they hear when receiving guidance.

Clairsentience can be described as the ability to perceive messages from the higher realms through feelings, downloads and energetic fields. Those who are clairsentient often will perceive even the most subtle of changes in the energy around them. Often they know the moods and feelings of those around them with out anyone having to say a word.

Those who are clairsentient also regularly receive messages through strong gut feelings or a sudden inner knowing to a question they had consciously asked. Some like to refer to these sudden inner knowing as an instant download of energy. All energy is encoded with packets of information, but how you interpret that information is unique to each of you.

As we so very often say, channeling is very easy, yet trusting what you receive seems to be the most difficult part for most. It requires no effort on your behalf; in fact many of you channel quite regularly. It comes through effortlessly and naturally when you don’t try so hard. Trying creates blocks, only by allowing can you receive the messages that we send.

As we said, all of you were born with this innate ability to channel messages from the higher realms. Children have wonderful intuitive senses and can often detect other beings with their physical eyes for at the very least a solid year or two however as they are continually told that those beings are not real, and learn to rely more heavily on their 5 physical senses the ability begins to fade overtime. This is most common between the ages of 3-5.

We are not saying that all children loose this ability, rather we would say the majority of human’s intuitive abilities lessen as they grow into their early teens and adulthood. But just because this is the pattern that we have seen most regularly on your world, does not mean that it must continue.

As each young parent begins to awaken to the endless possibilities that lie within the human mind, the parents can and will begin to cultivate this natural ability in their children rather than suppress it. It is part of the evolution of humanity.

We are always ready and eager to connect with you. All you must do is ask and we will always respond.

We hope that this message has served you in some way.

In love and light, we are your Angelic Guides

“Angelic Guides: Clairvoyant, Clairsentient, Clairaudient: Which one are you?” Channeled by Taryn Crimi, December 13, 2016, at www.Angelic-Guides.com