Conversation with the soul of Ernest Hemingway via Li in China, April 21st, 2018 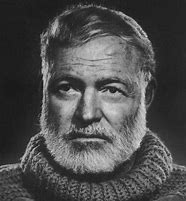 Conversation with the soul of Mr. Ernest Hemingway

Hemingway: Human should find me in this way. What’s the business? I am not staying on earth anymore. Hemingway was only a flash for me. Earth is boisterous now. I really want to come again. Why do you find me anyway? Anything I can do?

Li: Are you coming to earth again? What would be your job?

Hemingway:  Hemingway was representative to my energy actually. I am a tough guy. I am a warrior from War System. Hemingway was a physical body made by me to kill those Devils on earth and also to conduct messages from the universe. Don’t you feel Hemingway powerful?

Now that human doesn’t forget me, I’ll make a conversation with earth again. It is my honor and my pride. I will bring my energy to earth again. Human will know how powerful the War System is. The system I stayed in is one of the bravest in the universe. We are all courageous and unbeaten. There is little war in the universe, especially the high-level spaces, where stand our War System forever. I hope I can stand there too. I have to grow fast and to be strong enough to devote more to all beings. War System is famous for our loyalty and brave. We’ve made many contributions in this Good VS Evil battle. Us with positive energies will never allow any evil beings to hurt the universe and its creatures. We fight to guarantee that all beings can live in peaceful and harmonious condition rather than in pain like earth. Almost all battle was set in low-level spaces. And I didn’t receive any order to go to the earth yet. But we will always fight, no matter where we are sent. It is our responsibility to protect the universe with our own life.

Li: It turns out that you are a warrior in the universe. Since you are a tough guy in the universe, I guess you came to earth to fight against Devils. How did it go? Why did you end your life by committing to suicide?

Hemingway: There are many high-level souls from all kinds of systems. There were also many of them but only with few awake. Those who can achieve their goals are also rare. In the past hundreds years, the universe always send some powerful creative Gods to earth. But the Devils proliferated gradually. Our War System was started to reincarnate on earth. Only part of energy can get into physical body smoothly because of the twisted space and low frequency of physical body. The other part of energy can either be polluted by Devils or be shielded. Things like this are common. There are also many energies that did not survive before I arrived on earth.

I only felt few energy connection after I came here. We came in team as first to cooperate each other. That’s to say we need to connect each other to flow our energy. And only in this way can our War System exert our energy to kill Devils. But we get lost with each other. Physical bodies didn’t have any connection and energy couldn’t get resonance. Our whole team was almost completely annihilated. It was awful for us. But I still have my dignity. You asked me why did I ended my life by committing suicide. The answer is simple. A soldier prefers death to humiliation. My physical body was attacked badly and I had relative clear consciousness. Hence I began to conduct my fight energy to human. Devils attacked me because they fear me. They wanted my energy to die. This was a painful life while I won’t allow any compromise in it. I’d rather end my life. The energy brought by my soul was still there though my physical body has come to an end. I won’t allow my physical body to interfere with my life responsibility. That’s the basic thing a warrior should do. It is an attitude. I don’t deserve the name of warrior if I say yes to the enemy.

Li: Your words really shocked me, Mr. Hemingway. I didn’t know just how positive energy is in the universe. Why were you a writer on earth when your real identity is a warrior in the universe?

Hemingway: The energy communication in human world was very low. They couldn’t conduct it fast and there was little high-level energy. The reason I choose to be a writer is that I want to conduct my energy into something real on earth. I want those warrior energies to flow into human heart through language. I want humans to understand that justice will never lose. Fight form varies in the universe. it wasn’t that simple as human thought. This energy battle is everywhere on earth. I write with my warrior energy to kill those coward, fear and timid energies. Hemingway spread those fight energy in the universe with all he could.

Li: Can you tell us how to fight against the Devil? We need those instructions. We don’t want to give in neither.

Hemingway: Aha. It makes sense. I should give some fight knowledge to you. Devils on earth are now in fact lingering. They are killed badly by the universe. Almost all Devil-Master have been eliminated. Most Devils on earth now are those derived from human heart. Humans are penetrated by Devils. Why are humans not happy? They didn’t have enough positive energy. They are fighting between Good and Evil. Generally speaking, Devil took most advantages. Human are almost captured by Devil. Though even a thin string of positive energy can bring human to positive, countless Devils would attack him afterwards.

How can human feel happy under this condition? They are all living in pain now. Human Karma is hanging over the whole earth now. The universe is both merciful and strict. The universe decided to make a revolution on earth. I guarantee as Hemingway to you human that all of you will awake. You are having a great save now. All you should do is to abandon the old thoughts and receive new light from the universe, which means receive a more advanced energy. You need positive energy badly. You cannot fight against Devils in human current condition. Human need more open consciousness and human should stand up to fight. Change all selfish idea into selfless. Believe that you are the positive energy from the universe. Believe that what you should do is to devote yourself to the universe. Human will get stuck into Devils forever if they still refuse to make any changes. Devote yourself, my friend. That’s where the meaning of your life is. I am grateful to this conversation. It is a precious opportunity. Thanks for the universe. Thanks for everything. Thank you, Li.