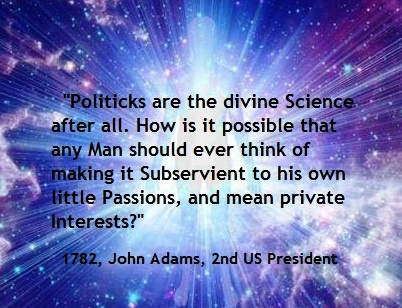 “Greetings!  I am Saint Germain.  And I feel with you the empowerment that is within each and every one of us, coming together in this grand era in the history/herstory of Planet Earth!  And, yes, these are turbulent times as well as times of accomplishment.  And great Joy is to be had – exuberant, exhilarating – absolutely!  And yet, there is work to be done.

“Now, the eyes of the World are upon the political campaigns which are taking place in the United States of America.  But they are taking place all over the World, this jockeying for position.  These political arenas exist not just in countries, but in states, in communities and, yes, even in families!  And this has been the case throughout the eons of time that have passed.

“You need look no further than that era in France – ‘It was the best of times; it was the worst of times.’ *  Does that not sound appropriate?  Because if you look at your news media and you see the outrageousness which is occurring again in these political campaigns as the example that I am bringing to you in this moment – it does seem to be the impossible dream, does it not, that this will all evolve into a Oneness, a loving Oneness, with Peace everywhere upon the Planet, and Abundance for all? And Freedom, Freedom to be, to express, to do what you ultimately have come here for.  And yet that is exactly what is happening. That is exactly what is happening!!!

“It is mentioned that France is – among other countries, among other places – a place known for its great food.  And this is true, is it not?  Well, consider the chef who is about to mix some ingredients together, and it is that some of these ingredients do not seem to be all that harmonious with each other. But voila, when it comes out of the oven, or out of the pot, it is a most beautiful, savory and fulfilling feast for all present to consume! That is what is happening now!

“And so when you see or hear of something that seems to be disharmonious to this Peace, this Joy, this Abundance and all that you are here to partake in, to help to create, to bring about and to enjoy – remember!  That which goes into the pot or the mixing bowl is but one, one ingredient, and it is the whole that comes out of it that gives the desired result!

“Now, how can I be comparing the ingredients in a mixing bowl to Humanity and all of the Kingdoms of Planet Earth? It is what Humanity expresses – and the other Kingdoms, too, to a certain extent.  The ingredients for this evolvement are what is being expressed and, in some cases, they do seem to be most disharmonious.  And you need look no further, again, than the political arena.  But I can assure you that, for every liar that has the stage at this moment, there are hundreds or even thousands of Truthtellers who know the Truth of Love, who know the Truth of coming together in Oneness, who know the Truth of joining Hearts – as well as Minds – and it is the creation of all!

“Now, when you hear these candidates getting up, thank them for reminding you where politics and its expressions have been. Thank them for bringing this into the Light.  Thank those who are publishing accountings of this, the whistleblowers for one, the ones who have stood up and said, ‘What a minute!People need to know of this.  They need to know that this ingredient is in the pot and has been the overwhelming one and now it is to be tempered with these new ingredients.’  Thank the ones who have the Courage to stand tall, because they are coming more and more!They are joining their Lights.  They are becoming the overwhelming energy that will take the ones who still want to be political in the old, dark ways of expression, and they will say ‘NO!!!’

“And when you go to vote, no matter where you live, no matter whether you are speaking up in a community forum, or passing out the NESARA flyers, or going to vote yourselves – stand with the Light!  Vote with the Light!  Speak for the Light, and teach the Light in every way that you can conceive to do, because this is your hour!!!   If you want to say, ‘your finest hour,’ so be it!

“This is the new age, the new era.  This is the best of times!  As my Brother** has said, trust it!  Trust yourselves that you are lighting the way literally, with your own Love.  Let that be your banner – you need no others. You need no country flags.  You need no deeds to properties, or dollars on your bank account ledgers.  You need yourselves, freeing yourselves to being in the Oneness, the Oneness that you deserve, the Oneness that you are here to be a part of!   And those who are not expressing from the Highest Levels of Love and Light their political opinions and agendas – they shall not prevail.  They shall not prevail!!!

“You have all heard it said that there is one in the United States of America – and I shall give him as an example of a leader.  Read his words, hear his voice.  Connect with him directly.  Do the LoveLight Meditation*** to connect with him, if you wish.  Of course, that is the one called, Bernie!  And he has expressed interest in another great being of LoveLight to stand with him and her name is Elizabeth – Elizabeth Warren!  Picture those two.They are NESARA Law exemplified!  They are the Spirit of the NESARA Law!  They are political beings, yes, because they express in the political arena, but they are Divine!

“And there are ones like them standing up – ones such as yourselves!  You need not be a candidate to stand WITH a candidate on any and all levels anywhere in the World.  Anyone, anyonewho speaks from their Heart and expresses their political dreams, desires, and yes, agendas in terms of NESARA Law, TRUENESARA LAW – no conditions, as in, ‘well, I like this but I don’t like that – you understand what I’m saying – then stand with and for them!  Support them Worldwide!!!  Do the Exercise.***  Let the ones who are in the political arena shine forth for all the World -they’re there!

“Or as the one who lived in that particular era wrote’. . . the best of times, the worst of times,’* during the political upheavals in the country of France, which spread around the World.  As our hero**** used to say, ‘I’m here, I’m there, I’m everywhere!’  Well, so are you!!! You may be living in a town in Australia.  You may be living in a village in South America.  You may be in the City of Light itself.  It matters not where you are!  You are here, you are there, you are everywhere when you share your LoveLight with the World!!!

“So shine it forth for those who are standing in the political arena, and for those who have yet to stand up because they are leaders who have the vision, who know the NESARA Law – whether they are consciously aware of it or not – and they’re the ones with the desire to institute the Reformation to make that part of your Governance secure in its Divine Origins!

“And so, most esteemed and Beloved Family Members, I, Saint Germain, encourage you to continue to support NESARA and, indeed, all of its supporters, most of whom***** cannot even say it by name, but nevertheless, whose political programs will express NESARA on the highest levels of Love and Light for all of the World to enjoy – Freedom for all, with all of the Light and the Love that you came here to express, to support, and to live!  So be it.  Namaste!”
*     From A Tale of Two Cities, by Charles Dickens
**   Ashtar – We will publish the transcript of his message in an upcoming email and on our website – “Stay tuned!” Here is the recording:
httpss://www.freeconferencecallhd.com/playback/?n=RYHyA/jNZml
***   Sananda’s Healing Hands of LoveLight Meditation:
https://www.ashtarontheroad.com/group-session-with-sananda.html
**** The Scarlet Pimpernell, by  Emma Orczy
*****Political leaders and candidates who are under a VERY STRICT gag order.
https://www.ashtarontheroad.com/st-germain-divine-politics.html
Transcription by Marta.
Given through Susan Leland, April 26, 2016. www.AshtarontheRoad.com
© Ashtar On The Road Publications 2004-2016. All rights reserved; however, this is a gift to all of us and it may be distributed freely on condition that all accreditation is acknowledged and that no part is altered or deleted.