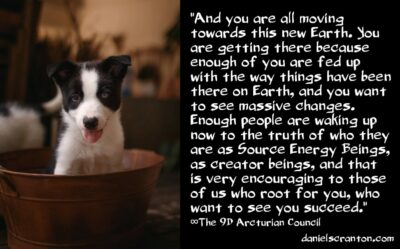 The Earth Collective Meetings in the Astral Plane ∞The 9D Arcturian Council, Channeled by Daniel Scranton

We are very pleased to announce that humanity has taken yet another leap forward in the ascension of your consciousness. You have made such tremendous strides in your development, because enough of you have gotten fed up with the way life has been there on Earth for so long, and that segment of the population that desires great change has been getting together in the astral plane with the intention of creating some wonderful new systems for your planet.

Not everyone who gathers together in this Earth Collective in the astral plane would agree with each other if they were to gather together while in their fourth-dimensional bodies with their fourth-dimensional minds, operating from their egos. But in the astral plane, you all come together because you may not agree on what is needed, or how to change, but you do agree that change is needed there on Earth because the systems that you have in place serve the few and not the many.

And we have noticed that there is still a large segment of the population that expects a few politicians to bring about all of the changes, while they sit on their hands and do nothing. There are many humans who assume that someone else is going to create that reality for them, someone in a position of power. That is not the case.

It takes more than one, or two, or three, or ten people to enact change on your world. This gathering together of what we are calling the Earth Collective in the astral plane realizes that it takes many of you coming together and working together to bring about the changes that you want to see on your world. Now the vision that this Earth Collective holds for humanity is brilliant. There is a version of the human collective conscious that you are a part of that is benefitting just from the meetings, but the creations of the new Earth, an Earth that can still be actualized in the fourth dimension, are beautiful.

And you are all moving towards this new Earth. You are getting there because enough of you are fed up with the way things have been there on Earth, and you want to see massive changes. Enough people are waking up now to the truth of who they are as Source Energy Beings, as creator beings, and that is very encouraging to those of us who root for you, who want to see you succeed.

We, of course, have been invited to these gatherings, and we love to put our perspective into the mix. And we also love that this particular Earth Collective thinks for itself. These individuals, and we know we are speaking to many of you right now, are determined, empowered, and certain that they can make the best possible version of the new Earth, an Earth that is for all, not just for the fortunate few. And as you put your intention to join this collective out there, we are certain that you will be attending the next meeting that takes place in the astral plane.