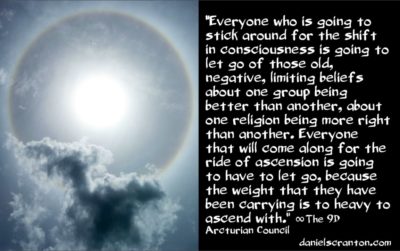 You Must Keep Up with the Current Energies ∞The 9D Arcturian Council, Channeled by Daniel Scranton

We are very interested in following humanity through your current circumstances, because we know that all the situations you have there on your planet must get better. You all simply must keep up with the high vibrational energies that are coming in from all points within this galaxy. You cannot escape the love, the light, and the healing that is coming in to support humankind, especially during a crisis, especially when you need those energies the most.

Now, there are those on your world who are very closed off to change. They want to keep things as they are, or even go back to an earlier time that they romanticize. But we say to you that we follow the evolution of your consciousness, and you have been gradually raising the overall vibration there on Earth. And again, you do not really have a choice.

Earth is ascending. Humanity is ascending, and people can either resist that and resist the forward movement of change, or they can decide once and for all to go with the flow and have faith that things are getting better. As we said, it is inevitable that things get better, because the universe is expanding, because of the energies that you are receiving, and because it simply is part of the plan that you and everyone else set up for yourselves to grow and to expand, to become more of that which you really are.

And so, everyone who is going to stick around for the shift in consciousness is going to let go of those old, negative, limiting beliefs about one group being better than another, about one religion being more right than another. Everyone that will come along for the ride of ascension is going to have to let go, because the weight that they have been carrying is to heavy to ascend with.

And for those of you who are awake and who have been awake for quite some time, remember that the unawakened are also carrying a tremendous amount of trauma. They simply have more to clear than they feel capable of handling, and that’s what you are there for. You are there to help those who need it the most, and then you can all ascend together.

It won’t be because you changed everyone’s minds. It will be because you were there for them during their time of need, in that perfect moment when they decided to let go and to release the trauma they’ve been carrying around with themselves for lifetimes. We know that you can do this. We know that many of you are doing it already, and we know that we will continue to be here to support you from behind the scenes.