The Arcturian Council via Daniel Scranton, May 15th, 2021

Energies to Stimulate Your E.T. DNA ∞The 9D Arcturian Council 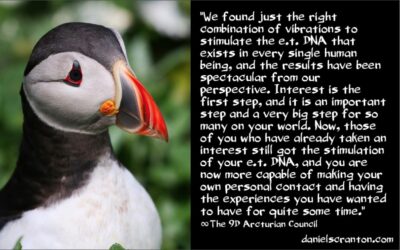 We are so very aware of how you all are handling the current influx of galactic energies that are upon you right now, and we feel very encouraged by the response that humanity has had to them. We know that there are many of you out there who are interested in e.t.s and UFOs and others who are just curious about whether there is life on other worlds in your galaxy and universe. And of course, the recent influx of galactic energies has been well received by those of you who are looking to the stars and tuning in to the galactic community on a regular basis.

But those humans who have not been curious, or who have not believed that e.t.s could even possibly exist, are also being affected by these beautiful energies that you have upon you right now, and that means that all of the beings who are responsible for sending those energies really got it right this time, and we are among those who initiated this campaign. All of us in the galactic community are interested in humanity, but not all of humanity is interested in us. We would like to start with getting all humans interested in all the other beings throughout the galaxy and universe.

And so, we found just the right combination of vibrations to stimulate the e.t. DNA that exists in every single human being, and the results have been spectacular from our perspective. Interest is the first step, and it is an important step and a very big step for so many on your world. Now, those of you who have already taken an interest still got the stimulation of your e.t. DNA, and you are now more capable of making your own personal contact and having the experiences you have wanted to have for quite some time.

As you know, the slow, steady disclosure is happening, and that is opening many, many doors for humanity. You are so very close to living in a society where e.t.s can walk amongst you, and the openness of the average person to that is so wonderfully encouraging that we are completely optimistic about the timeline you are currently on right now, and the result of more people wanting this experience has positive implications that ripple throughout the galaxy.