The Arcturian Council via Daniel Scranton with VIDEO, November 21st, 2019 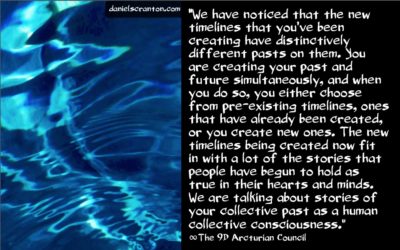 We have been exploring the timelines that are in front of humanity, and we have noticed that the new timelines that you’ve been creating have distinctively different pasts on them. You are creating your past and future simultaneously, and when you do so, you either choose from pre-existing timelines, ones that have already been created, or you create new ones. The new timelines being created now fit in with a lot of the stories that people have begun to hold as true in their hearts and minds. We are talking about stories of your collective past as a human collective consciousness.

You have had many experiences that will never be talked about by historians because there isn’t enough concrete or written evidence to support the existence of those stories of your past. But you, who are awake, are very creative, and you’re more open minded to possibilities that others would not even consider. Others would laugh at you for believing in the stories of your past that you hold true. Many humans need a book, or some bones, or perhaps some tablets, to prove to them what you’ve experienced there on Earth.

But now you have so many investigators who are telling a different story about the span of time in which humanity has been there on Earth. You have accounts from scientists telling you that you have extra-terrestrials living in your oceans. You have other scientists talking about parallel universes as if they are more than just science fiction. And so, you are making choices every single day and offering vibrations that align you with new stories, new timelines. And therefore, the idea that there is one future that is set in stone and that you are all inevitably going to experience is preposterous.

There is not just one future because there is not just one timeline for humanity. So when you hear about a future that doesn’t sound very nice to you, just ask yourself if you want to vibrate in harmony with that timeline or not. And then, paint the picture of the timeline that you want to live in and actualize the experience of that future by tuning yourself to it. Talk about the version of the future that you are creating as if it were a work of art that you were in the process of creating. You are creators. You are artists. And in this fourth dimension that you are in, you have more freedom and less limitation than you have ever experienced there in human bodies on Earth.

Therefore, it is time for you to claim the future of your choosing and to align with the version of humanity that will be going along with you on that timeline. We invite you to dream big and feel even bigger, as you step into your creative studios and you vibrate into existence the future that feel best to you.