This is Aurora, mermaid from the water and sea kingdom.

It is with pleasure that I can give you this information regarding the lost city.

The lost city is what you call Atlantis and Lemuria. With their fall, they both descended on to the seabed, and with the tectonic movements of the earth by the crust of the earth, the two civilizations have been brought together in a united city. We have named it the lost city as it represents a united kingdom that was never achieved.

The idea from the beginning of the creation of Atlantis was that the Atlantis and the Mu (Lemurians) would help each other achieve a balance by representing the divine masculine and the divine feminine, this plan was never achieved and was in fact from the highest never meant to be.

But Atlantis and Lemuria are united here with us on the sea floor and we have recreated its golden times in a united city that balanced vibrations in both, the divinely masculine and divinely feminine tone.

And when the earth has reached its proper point in the ascension, the united city will rise from the sea floor with our help and act as a large force field and a gathering arena where many of you will be working on your specific ascension assignments.

The Crystal Skulls will be brought back here from their hidden places and those who have strong connections and ascension missions that come from the United City will remember it. This can begin already in the form of dreams or just a knowing or a voice shouting in the wind. Know then that we are calling you.

With love // ​​Aurora from the water and sea kingdom. 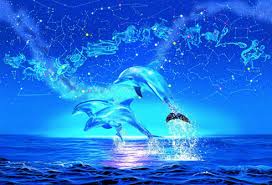