I am Mary Magdalene. I am present here with joy. I have been a human being just like you and I loved being human!

I know you often feel that being human gives you a lot of burdens, but please be aware that it is only by being human that you can experience intense emotion and revelation. It is true that your soul’s awareness is partially veiled when you are human and on Earth, but this partial veiling gives you the possibility of experiencing, very intimately and deeply, life with all its ups and downs. And it is the depth of your experience that in the end makes you wise. To me, the face of an old man or woman, a wrinkled face with soft eyes, is much more beautiful than the face of an angel. I honor the human being.

Human beings are either male or female, and their gender is a profound part of who they are. When you go through the experience of being human, your gender greatly influences how you respond to life. When you come down to Earth as a soul incarnating in a human body, you pick up the collective energies of male and female as they are on Earth. So, all of you, when you become either male or female, carry some of the burdens of the past.

When you choose to become a woman on Earth, you will face some of the issues that women have been facing for many generations. You will identify mostly with a female energy and, when you grow up, you will think of yourself, firstly, as a woman. I ask you, if you are a woman, to feel your female energy very clearly, and if you are a man, to clearly feel your male energy. I now ask you to realize, although you are aware of this female or male energy, that there is also an aspect of this awareness inside you that goes beyond the male and the female. And because of this awareness that goes beyond duality, you can start to feel the energies within duality.

In the present time, a change of consciousness is happening, and one of the most important aspects of this change is the changing relationship between men and women. Men and women have become alienated from one another. Because of very one-sided images in the past, of both male and female, the sexes have become estranged from one another. Of course, there has been violence between the sexes, and sexuality itself, which is a sacred area, has been violated. In the society around you, by way of magazines, television, and movies, you see a lot of images of sexuality and beauty, but real and true intimacy between men and women is quite rare, and this situation needs to change. We can only build a new world when men and women start to again love one another.

I would like to first speak about women’s energy. When a woman feels disrespected in her female energy, she withdraws from the lower energy centers in her body, mainly her abdomen. The most extreme cases of disrespect are abuse and sexual violence, and this can be so traumatizing for a woman that she tends to dissociate from her body. There are also less extreme forms of violence, such as when women are told to become like men and to not value their female energy. Then their true nature is denied or repressed, so it is rare for women to be truly at ease with their femaleness and themselves.

In this age, especially, the heart of women is needed to change reality. The ability to connect deeply with others, the ability of empathize, is so much needed to bridge the gap between people and nations. But if women cannot truly take pride in themselves and take up their rightful space, their beautiful heart energy will not be truly expressed in the world. So I ask each of you to now travel with your attention into the area of the abdomen, and to imagine that in the middle of it is a source of power, of vitality, of light. Here your soul’s energy gets rooted into the Earth. Imagine, that with every breath, you touch this source of strength inside you. Feel the female energy of Earth and allow Earth energy to travel upward through your legs.

See if you can discover a little girl inside your belly. What does she look like? Does she feel comfortable with herself? Is she able to express herself? Does she think she is beautiful? Does she feel happy with her own body? Imagine that this little girl is naked and running freely in nature; she feels the air, the wind, the ground beneath her feet and she feels deeply connected to the Earth and to all the elements. She is not concerned about how she looks, or what other people think of her; she is a wild girl, yet her heart is very pure. This is the energy that society needs right now. The true female energy is wild and playful, yet at the same time very open and soft.

It is now time for healing, now time for understanding one another. In all of you is an awareness that transcends both male and female, because you all have had lifetimes in both bodies, in both sexes. So when I ask women to again own their strength and their power, this is not an act of hostility toward men. I am asking women to claim their independence, to stand up as the beautiful wise women they are, and to not rely on a man in their lives, but to use their own male energy. When women do this, men will feel they are more allowed to connect to their female energy, which is why it is so important to balance the male and female energies inside yourself. When both men and women become more whole inside, it becomes easier to reach out to the other gender. A partner relationship between men and women is an essential part of being human. These relationships can be such a source of joy and inspiration, but this can only happen when both sexes take responsibility for their inner wound and treat one another with respect.

Finally, I ask you to imagine someone in your life, perhaps from the past, who is of the opposite gender and who you knew, or know, very well, and to use your female energy to really try to understand this other person. Perhaps there is something in this person’s behavior that has annoyed or upset you and that you did not really understand. Try to be as open as possible and feel what has led to this behavior, or what it feels like to be that person. And even if you do not fully understand it, trying to do so is an act of kindness and builds a bridge toward the other sex. In doing so, you do not have to give up yourself, you can remain independent and true to yourself. It is when you have a strong male energy that you can also have a strong female energy.

Thank you all for being here today. I love being with you. 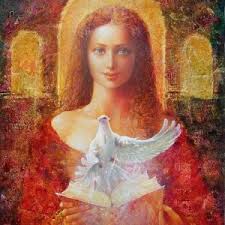