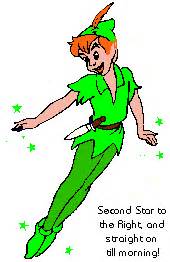 I am Peter Pan and in peoples minds I belong to the World of Fairy Tales. Of course I am a fairy tale, a beautiful fairy tale and we live next to your world. It is also called the Kingdom of the Elves. It is a beautiful kingdom that is situated just above your dimension. Many different things have happened here during the course of the centuries, for better and for worse. Now it is a peaceful kingdom in the fifth dimension, the highest dimension that exists on Earth. Yes, the fifth dimension exists on Earth also. It exists a bit here and there, but is not making a big deal of itself. The large step will soon be taken and then a change of consciousness will take place on Earth, which will lead to the picture changing so that the reverse eventually will exist.

The Golden Age is here and we help nature and the animals to adjust to the higher energy. This beautiful nature is grateful to be able to help Mother Earth in her grand transformation. A great joy and gratefulness vibrates in the air from all corners of Earth. Love is spreading its wings and plants its seeds, as the small elves say, as they diligently fly from one flower to another. The powers of nature are great and they do want to help Mother Earth as much as they can, since she is their beloved Mother and they just want her very best.

You are also part of nature and a part of us. We are One and need to help each other to get better balance in the world we live in. Collaboration between our world and yours is preferable. Together we have the knowledge and understanding of how we best can live on Earth without tilting the balance. The balance is important – dear children on Earth. If something breaks somewhere it must be balanced elsewhere. It is like a spider net that needs to be repaired and mended. Sometimes one even has to start anew again.

Here we are now with an Earth with its blemishes. What is possible to repair? Is new thinking needed? Do we need to start over from the beginning? The answer is yours and you need to act accordingly. It is wise to listen to old souls that have solid knowledge since a long time back. The knowledge exists, it just has been hidden away, but will now be brought forward into the Light.

Be happy and be grateful for these powers that so wisely have saved this knowledge during hundreds or thousands of years, till the day at last would come when it would be brought forward and used again. Many wise men and women have stored this knowledge and they have also renewed and improved on it in order to adjust it to the times that would come.

The time is now, dear friends. It is now that our time is here – our and your time to ascend with our dearest Mother Earth. She is dearer to us than anything else down here on the planet where we live.

I leave you know and humbly wish that you send some love to nature, which also is a part of you. Mother Earth’s rays are beautiful and she shines with a special radiance now. We send her much love to as she is our great hope and joy for the future, which we are now heading into.