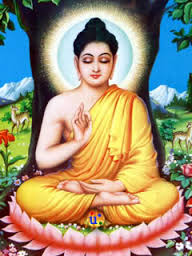 Anger you reject, rage you refuse and hatred that leaves you untouched, will release elsewhere.

Floral wreaths you are handed, praise you receive, and affection you are presented with, will unfold their sweet fragrance elsewhere if you remain untouched by them. Because someone who has awakened knows life and knows himself – and hence does not attempt to own what is not his.

The path to enlightenment is defined by realizations coming from deep inner spiritual experiences. That is how life serves you, and every day is handing you issues on the platter of life.

Inner growth is only possible when outer circumstances are considered and respected. Respect the unpleasant and the pleasant events in your life and look at everything that touches you one way or another.

The awakened one knows when and why he brings about this or that – and so the weight resting on his shoulders is never his own heaviness but the burdens of those he loves unconditionally.

That is how the awakened one walks among other human beings. Without leaving a trace, he serves a world that needs him, and serves those who come to him.

Are you ready to get to this source? Then come! Because truly:

Eternal life comes to those who look for the source and drink from the source.