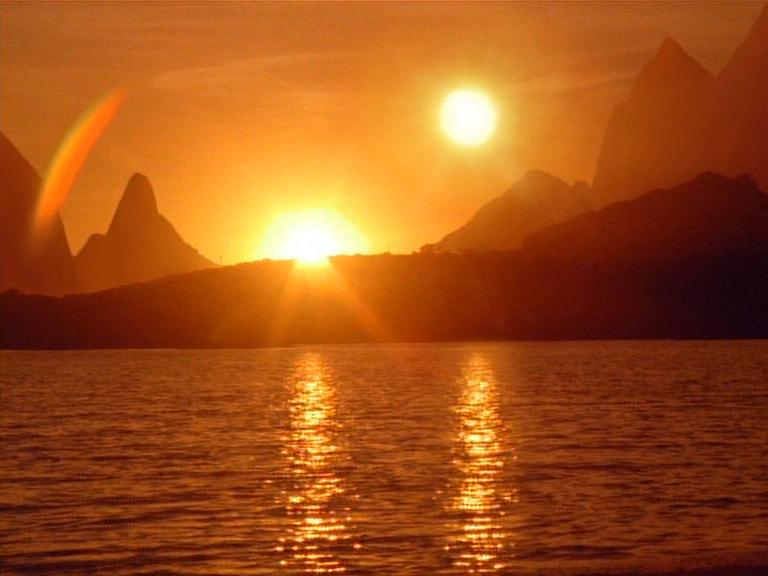 The end of July is celebrated as the Planetary New Year because many of the ancient Time Keeper races on the Earth recognized this as the moment when an important New Cycle of Evolutionary Time was initiated. This period was also associated with what was known as the “Lion’s Gate”, the historical moment when the constellation of Leo aligned with the Pyramid complex at Giza. But you might ask, why is that important to me in the year 2015?

This is because the Planetary New Year celebrates the moment when the Blue Star Sirius rises in the morning sky at the same time and in nearby location to our Sun. It is the time when Earth has Two visible “suns” in the sky. The one sun is Golden, and the other is Blue in Frequency. This conjunction of Stars celebrates the long connection between Earth, and its Sun, and the Star System of Sirius.

In Ancient Egypt, in the post Atlantean civilization that sprang up on the banks of the Nile, the heliacal rising of Sirius, as it is known, also marked the time when the Nile River rose, due to rains in Central Africa, and flooded the plains of Egypt so that crops could be grown. The rising of the waters signified the return of Abundance and Blessings to the land, and this was also associated with Sirius and it’s helical rising in the East.

Sirius has long been a guiding light and force in the Evolution of the Earth. There were many powerful Star Teachers that came to the Earth to assist Humanity, and they were believed to be “gods”. These teachers included the Beings known as Isis and Osiris, who brought the arts of agriculture and learning to the peoples of Ancient Egypt to assist them to reconstruct their world after the trauma of the Atlantean catastrophe. And now,at this time, we are told that the Sirian Master Teachers are returning to our world to assist us with aligning our frequencies with the incoming Diamond Light that is raising the frequency of our Planet and of Humanity.

The Gold Sun and the Blue Sun

As Master teachers, the Sirians brought information to the Ancient Egyptians that helped them to remember who they were and where they were going. They taught them the principles of Ascension, and these were recorded in papyrus texts and on pyramid and temple walls. They reminded us all that our bodies are from the Earth but our Souls are from the Stars.

In recent years, they have also reminded us that everything is energy and frequency, and that ascending or raising our consciousness means that we can align ourselves with the frequencies that are coming from the Cosmic Heart and the Galactic Center ,and that are raising the frequency of our Light Bodies and our Physical bodies and DNA.

It was the Sirians who first taught us about the “Christ Consciousness” that was embodied in the Golden Light of the Sun. The Gold Frequency was Divine Light and it carried the energy of Divine Love and Compassion. As Humanity opened themselves to receive more of the transmissions of the Divine Light and more of the Light Codes that would elevate consciousness, they embraced the Gold Light and activated the Light Body and Multi-dimensional consciousness. The first Sirian Avatars of the Christ Consciousness were Isis and her partner Osiris, who brought the Golden Light to Egypt. The second Sirian Avatars were Yeshua, known as Jesus, and his partner, Mary Magdalene. Together they embodied the Divine Masculine and Feminine frequencies of the Gold Frequency of the Christ Consciousness.

The Blue Sun was Sirius itself, and it carried the Blue Frequency of that Star System also known as the “Blue Star”. This deep Blue Light carried the Codes of an advanced race of Light Beings who were in the service of the Divine Plan and the Evolution of the Galaxy and the Earth. The rising of the Blue Sun indicated another cycle of Light, Love and Support from the Sirian Master Teachers on the Path of Evolution. Following this event, those on the Earth could expect great blessings and abundance in their lives.

You might wonder what happened? Why was this teaching lost and why is it only now being recovered as we move into the Ascension process? Well, in the Ancient Egyptian world the Sacred duties of the Master Teachers was disrupted by a corrupt priesthood that had an agenda of control mostly through the manipulation of sexual energies. Since this world is a free will zone, Humanity was left to carry on its path and the Sirian Master Teachers withdrew from Egypt. The arrrival of Yeshua and Mary Magdalene represented another opportunity to anchor and ground the Golden Frequency. Initially this was achieved, after the death of Yeshua, by Mary Magdalene, who carried the teachings to France and into Europe. But again, a corrupt priesthood arose that ended the line of Mary Magdalene in the 12th Century with the Albigensian Crusade.

Now, in 2015, we are being given the chance to live the process of integrating the Gold Frequency in the process of Ascension. And, as the Blue Sun rises in the morning sky, we are reminded that waves of Love and Blessings are pouring out to us from the Sun, from Sirius, from the Great Central Sun at the Center of the Galaxy, and from the Cosmic Sun or Heart.The Blue Sun represents the Love and Support of advanced beings of Light who have incarnated on Earth or who have guided consciousness in other ways in order to achieve this moment of deep change when the Earth is ready to become a Body of Light and a Multi-dimensional Blue and Gold Star.

After the Planetary New Year on the 26th of July, there is a powerful Portal or Vortex that opens which allows these new Light Codes to flood into the Earth grids.  The constellation of Leo no longer aligns with the rising Sun as time has passed. But, the energy of the Lion is what is important at this vortex.

The Lion is the Frequency Keeper of Africa, and of course Egypt is part of Africa. The Spirit Keeper of the Portal is the Spirit Animal that guards the integrity of the African continent. The Lion also represents  Spiritual Power, and Yeshua/Jesus was known as the “Lion of Judah”, as the representative of the Sirian avatar line on Earth.

So, the “Lion’s Gate” is that moment when this portal opens to allow new Codes and new Information that will be the template for the year ahead. The Royal Lion stands guard over the New Timeline. In Ancient Egyptian hieroglyphs, the Gate was represented by two Lions who faced each other. They were known as the Lions of Yesterday and Tomorrow, and of course, it was “today” that came pouring through the gate. The Infinite “now” of present time that can be experienced as flow and creativity and blessings. The Lion’s Gate opens on the 26th of July, reaches its climax on the 8th of August, and closes on the 12th of August.

So it is, at this time, that there are many endings and new beginnings that go with the torrents of Light that come through the Lion’s Gate. Do not be sad or upset if these are intense times, they are meant to be. The power of new blessings is washing away what is no longer needed so that the new can be rooted and blessings result. In the Ancient Egyptian world this was clearly visible as the river flooded washing away the last of last years crops and depositing the rich red silt that would be the bed for the new seasons crops that would nourish the people and the land. In our time, the manifestation may not be so obvious, but we are going through the same intense process of ending and new beginnings for a richer and more abundant cycle ahead.

Ascension and the Master Teachers

Now, as we are in this wonderful process of the Ascension of our consciousness to higher frequencies, we are once again being aided and assisted by the Sirian Master Teachers. But, this time, we are not in a relationship of “gods” and “subjects”. We are ascnding into our own power, and the Master Teachers are seen as guides and helpers, rather than “gods”.

As we recognize the Divine Flame within ourselves and as we embody the Higher Frequencies, including the Gold, Blue and Diamond Frequencies, we understand that Earth has “graduated” to a new level where the Sirian Master Teachers can be consulted as “Star Family” and “Star Elders”, but that it is we ourselves who must drive our own Evolution through our Intentions and our Choices.

The Master Teachers are here to hold “Master Classes”, to remind us who we are and to help us to step into our power, but we must be the ones who embody the Crystalline Rainbow  Frequencies of the New Earth.

This time of the Planetary New Year and the Lion’s Gate is an ideal time to embrace this truth and step into our Multi-dimensional Light and Power as Ascended Humans, as New Earth Souls who embody all the Higher Frequencies of Light that were gifted to us by the Star Teachers and Avatars to advance our Spiritual and Physical Evolution on Earth.

If you would like to know more about what is happening and join with a Planetary Group of people who will be doing the “Journey” of the New Earth Soul and the Lion’s Gate together, we invite you to join our “New Earth Soul” online Webinars.